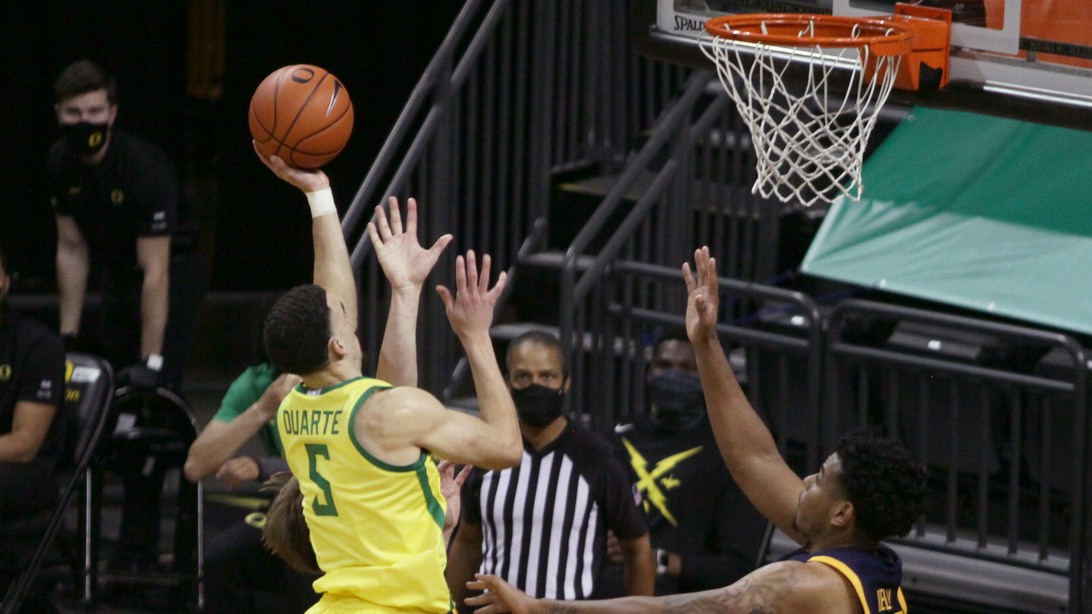 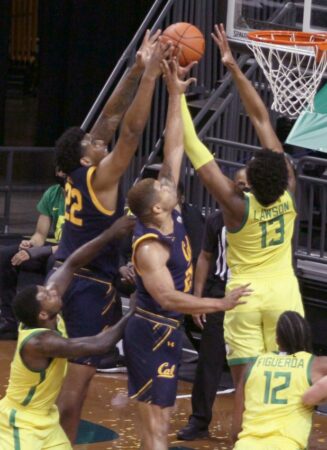 Sometimes the scoreboard can be deceiving.

Cal had Oregon on the ropes believe it or not, but the final score says the Ducks defeated the Bears fairly handily 82-69. But it wasn’t nearly that easy.

The Ducks found themselves down late in the first half and it was 49-49 with 12:45 remaining. Finally, someone on Oregon’s side found a hot hand and it was too much for the Bears to handle.

That hot hand belonged to Chris Duarte as he made four threes in the span of four minutes to help Oregon pull away from a pesky Cal team. Duarte ended up with 19 points, but he didn’t lead the Ducks.

Eugene Omaruyi was a beast inside as the senior scored 26 points on 10-of-14 from the field. He also was 5-of-9 from the line, but more importantly, he was able to draw fouls on both ends of the floor.

On the whole, the Ducks was 46 percent from the field on 28-of-61 shooting, including 11-of-26 from the three-point line. Six of those threes came in the last 10 minutes of the game.

Cal guard Matt Bradley was the one Bear that the Ducks had a problem covering. The junior led his team with 21 points, including 4-of-7 from long range. However, the Ducks did a much better job defending Bradley in the second half. 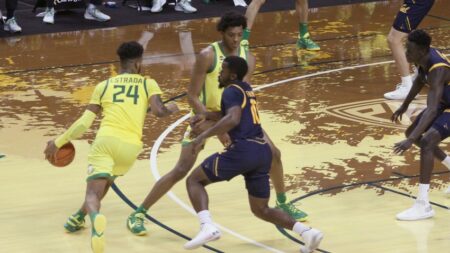 Makale Foreman was the only other Cal player to score in double figures with 14 points.

Oregon fell down seven points in the first half, but slowly got themselves back in the game and took a 36-35 halftime lead thanks to Aaron Estrada’s 30-footer at the buzzer.

The two teams went back and forth for the first eight minutes of the second half, but then the Ducks began to hit shots. Their defense was there for most of the night, but the Ducks had spurts of not being able to score the ball.

That ended with 10 minutes left thanks to Duarte and Omaruyi on the outside and inside, respectively. Still, the Bears were only down three at 65-62 with 5:36 left. That was when Duarte put the game on ice with three-pointers on consecutive possessions. All of the sudden, it was 71-62 Oregon and that was all she wrote for the Bears.

With the win, the Ducks improved to 7-1 on the season, 2-0 in league play, and winners of seven straight. They’ve also won 26 home games in a row. Oregon’s next outing will come Jan. 2 when they host Stanford. The Cardinal were scheduled to play Oregon State tonight, but the Beavers had to cancel due to COVID-19 concerns.

Oregon and Stanford tip off at 7 pm on ESPNU.