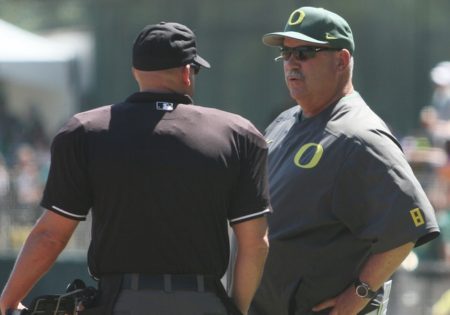 That thud you heard coming out of PK Park Saturday was the end of Oregon’s 2017 baseball campaign, a 10-1 shellacking at the hands of the UCLA Bruins.

The Ducks finished the year with a 30-25 overall record, but a disappointing 12-18 conference mark, causing them to miss the post-season for the second straight time.

The finale against the Bruins just highlighted Oregon’s problems this season, a lack of a consistent offense and the overall lack of a Sunday (in this case Saturday) starter. Oregon went 2-7 in those Sunday games. It was Cole Stringer who got bombed against the Bruins, allowing four earned runs on six hits in just two innings.

As for UCLA, Jon Olson dominated the Duck bats, going eight innings and allowing just one run and four hits, while striking out eight.

After its ninth season of baseball since bringing the sport back from a lengthy hiatus, the Ducks seem to be at a crossroads. They didn’t extend coach George Horton’s contract before the season ended for the first time and there’s no indication on what Athletic Director Rob Mullens might do.

Some factors may be working against Horton. He is one of the highest paid coaches in the country, but the program’s success, or recent lack of it, makes it difficult for the athletic department to justify his salary.

Horton’s counterpart at Oregon State, Pat Casey, just keeps on rolling and that dynamic certainly doesn’t play in Horton’s favor. The Beavers have been ranked No. 1 nearly the entire season and barring a major upset, should go to Omaha once again.

It’s also difficult on the baseball program to see the softball program become perennial contenders for not only conference championships, but a national title. Mike White’s team just advanced to the Women’s College World Series for the fourth time in eight seasons. Horton has promised a trip to Omaha, but in his nine seasons, his Ducks have made the tourney four times and the Super Regionals just once.

Oregon has had success recruiting some of the top pitching talent in the country, but the Ducks have never been able to figure out PK Park from an offensive standpoint. It’s definitely a pitchers’ park, but it’s been a mystery to their own hitters. In 2017, Oregon hit .257 as a team and just 19 homers. Those numbers, unfortunately, are the norm and not the exception.

The Ducks are a relatively young team with just two seniors on the roster. Oregon said goodbye to pitchers Cooper Stiles, Connor Zwetsch, Joe Reta and outfielder Jake Bennett. Either Horton or a new coaching staff will have a lot of freshmen and sophomores to work with and mold for the 2018 season.