Defense Ruling On The Hardwood 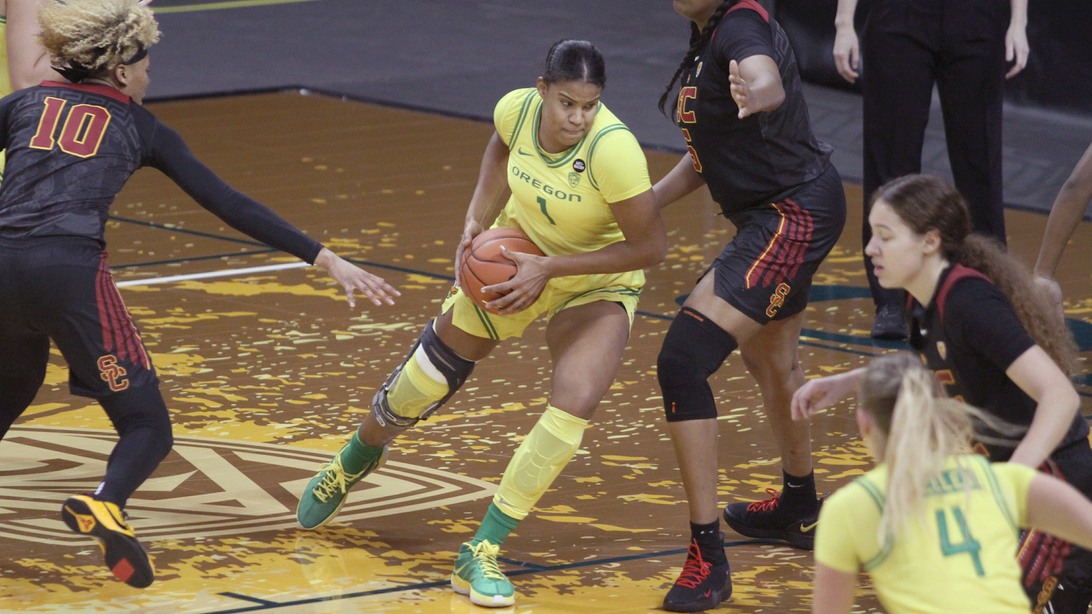 Defense Ruling On The Hardwood

Despite the recent setback with the Ducks’ first loss of the season, the Oregon women’s basketball team is off to a hot start at 8-1. It was nearly a calendar year since a Kelly Graves coached team had lost a game. The last loss coming Jan. 10, 2020 in Tempe at the hands of Arizona State. While whether or not they are able to make it to that mark, one thing is for sure. This team is special.

With all the talent that had to be replaced from last year’s team, fans were left to wonder what this year’s team would look like. The answer; a defensive Juggernaut. The most surprising part with having five freshmen on the roster has been their immediate defensive impact. Normally it takes freshmen some time to not only get used to a new system but also to accolade themselves to the physicality at the collegiate level. While the younger players have been a nice surprise, the more experienced players have made significant jumps defensively, giving this team a tough identity. Graves now has a deep roster and he has been using every bit of it. Twelve players have been logging minutes on a consistent basis so far this year.

Two players helping give this roster depth may be new to fans but not to the team. Sedona Prince who sat out last season due to transfer rules and Nyara Sabally who has been dealing with multiple injuries. Both have been fantastic defensive additions defending the rim. Prince has totaled seven blocks so far this season, and Sabally has added nine herself. Either of these post defenders can also guard all the way to the three-point line. Being able to switch onto shooters is becoming more and more important to bigs these days.

On the wing, Sydney Parrish and Maddie Scherr are two freshmen that have been particularly impressive. Scherr at 5’11” and Parrish at 6’2” have great size and length combined with guard-like foot speed. The duo is not only valuable guarding on the ball but play passing lanes well and have great instincts to help on dribble drives. Together the pair has totaled 13 steals and five blocks and been a key asset defending three-point shooters.

The most fierce combo defensively is at the guard position. Jaz Shelley and Taylor Chavez are about as tenacious as they come. Either player can defend the ball full court with relentless ball pressure. Making it extremely difficult for opponents to get into their sets. Also, early ball pressure can delay when teams can initiate an offense and often force shot clock violations because of it. On top of frustrating other teams’ guards, they each have nine steals this season. Te-Hina Paopao has also been a good addition on defense. What she lacks in size she more than makes up in quickness. Paopao may have the quickest hands on the team as well, which has helped her to also tally nine steals this season.

It is clear defense is what this team is going to hang their hat on. They have held their opponents to just 53.1 points per game and outscored them by 31 points in those games. The Ducks are forcing teams to shoot just 33.4% from the floor and an astonishing 21.6% from three-point range. That type of defensive output can only come from a truly great defensive team from top to bottom. It’s a suffocating style of play that can suck the energy out of opponents and force mistakes. When you make mistakes the Ducks will make you pay. Oregon is scoring 21.9 points per game off turnovers, those points being 41% of what their opponents are scoring total. As a team, Oregon is averaging 4.7 blocks per game as well as 8.9 steals.

The schedule is only going to get harder as we enter Pac-12 play. This team seems up to the challenge as they have been fearless early in the season. The entire roster has been involved and has brought their specific piece to the puzzle. Oh yea, this team is pretty special with the ball too.