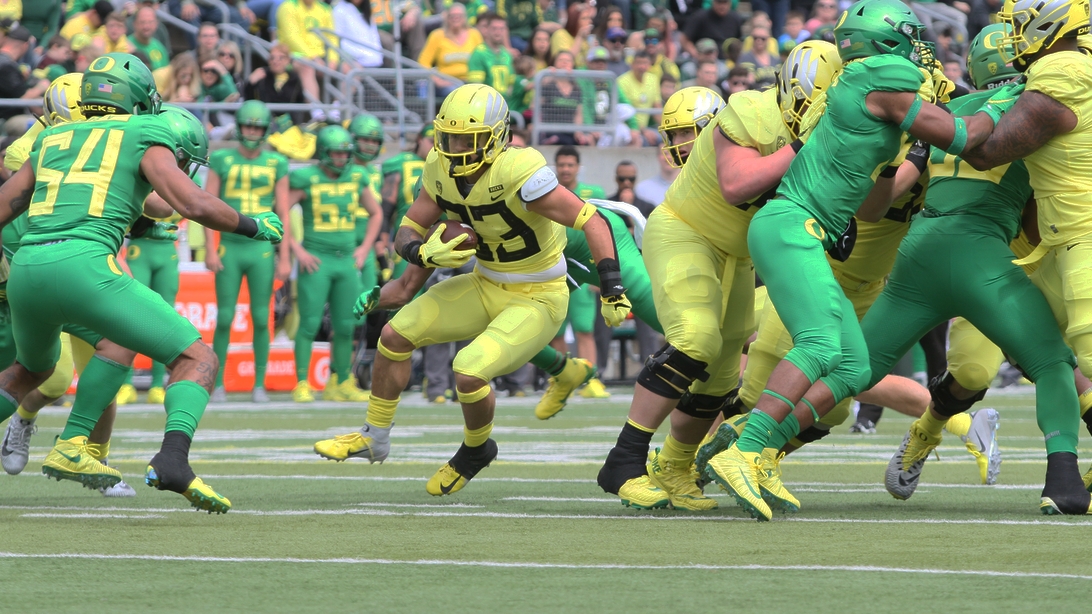 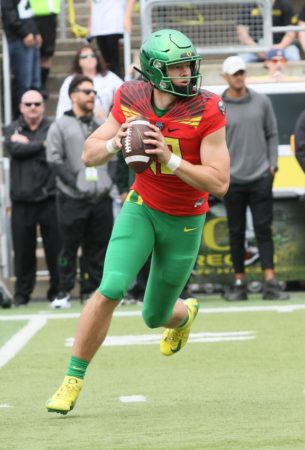 The annual Spring game is always an exhibition game in order for the Oregon football program to show off its assets to the fans and to potential recruits. Right now, the Ducks may have the most assets they’ve ever had and all of it was on full display Saturday afternoon inside Autzen Stadium.

In front of over 30,000 people, the Ducks played as real of a football game as possible in April and what they showed was that 2019 could be a fun year in Eugene.

What transpired was a very competitive game.

As expected, the ones outplayed the twos, but what was not expected was that the difference between the two units was not that far apart. Oregon is a deep and talented team and proves that the last two highly recruiting classes mixed in with a lot of veterans is going to pay dividends now.

Quarterback Justin Herbert did his thing as with most senior quarterbacks will do. The potential Heisman Trophy candidate was 17-of-32 for 219 yards, two touchdowns and no interceptions.

The Sheldon graduate may have also found a new favorite target. Wide receiver Dillon Mitchell may have left for the NFL, but senior transfer Juwan Johnson via Penn State showed he can come into the Duck program and make an immediate impact.

At 6-4, Johnson can make every type of catch, including those jump balls in the end zone, which he converted into a touchdown in the exhibition. For the day, Johnson caught three passes for 32 yards and that score.

Running backs Travis Dye and CJ Verdell might battle it out as to officially starts the game, but most likely, those two backs should see equal playing time. Dye happened to get the most carries this afternoon with 10, racking up 44 yards in the process.

Verdell actually led the his team with 72 yards receiver, but 64 of those yards were on one play. Herbert threw to eight different receivers.

The No. 2 offense consisted of younger players, but they could also make a significant impact on this team when the Ducks open the 2019 season at Jerry World in Dallas Aug. 31 vs. Auburn.

Back-up quarterback Tyler Shough proved that he is more than capable to step in for Herbert just in case disaster strikes and Herbert goes down for any reason. The redshirt freshman was 18-of-31 passing for 178 yards and one interception, which happened to be the last play of the game.

His favorite target seemed to be true freshman Mycah Pittman, who just showed up a few weeks ago, but he looked every bit of a 4-star recruit he was touted as being. Pittman led Fighting Ducks with seven receptions for 48 yards.

Cyrus Hibibi-Likio led the Fighting Ducks with 12 carries for 45 yards and the team’s lone touchdown. The 12 carries almost matched the number of carries Habibi-Likio has for the entire 2018 season (18), but the then-freshman found the end zone seven times and the Ducks are hoping he finds the end zone a lot more this season.

Both defenses shined and Oregon showed that facing a Duck defense isn’t going to be any fun for opponents this season.

Oregon’s defense will enter this season with a brand new coordinator in Andy Avalos, who came to Eugene from Boise State. From the looks of it, Avalos is going to have a lot of toys to play with, including veterans like Troy Dye and heralded freshmen such as defensive lineman Kayvon Thibodeaux.

In a little over four months, Oregon takes the field for real against a familiar SEC team and everything turns serious. But for now, it was just nice to see players in green and yellow uniforms run wild inside Autzen.