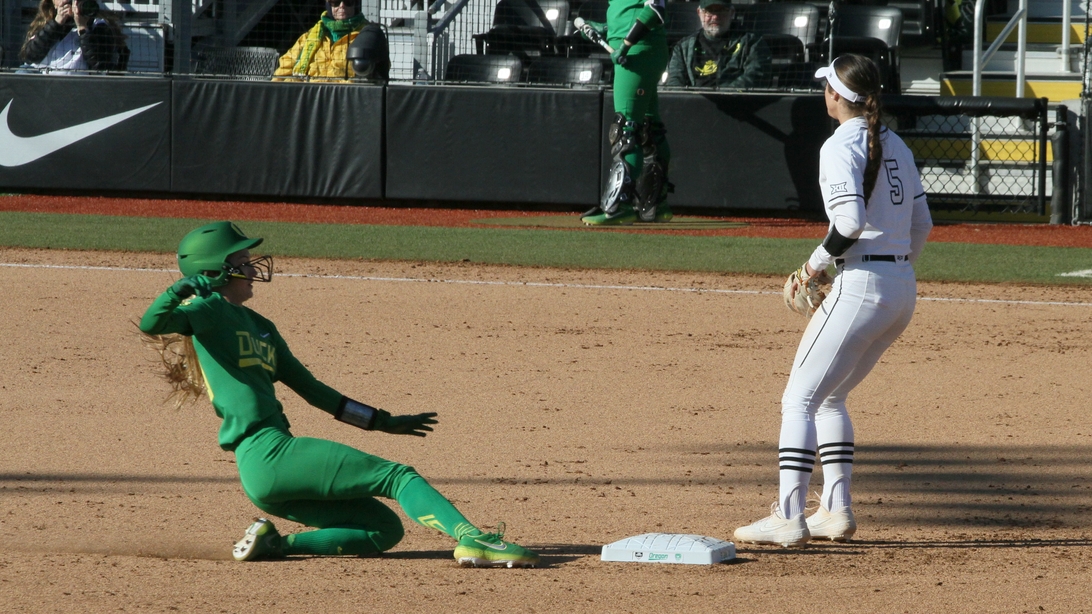 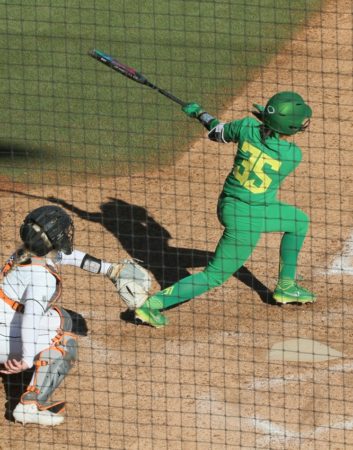 Oklahoma State completed a three game sweep of the Oregon Ducks taking both ends of a double-dip 7-6 and 9-6 Saturday afternoon at Jane Sanders Stadium.

To Oregon’s credit they proved senior outfielder Cherish Burks words were true the night before after the Cowgirls blanked the Ducks 3-0 in the opener.

“It will come together trust me,” the senior outfielder said of Oregon’s recent drought of offense. After hitting several balls hard but right at the defense on Friday night on Saturday the Ducks saw more balls find the turf.

Unfortunately the high powered Oklahoma State batting order kept dialing up a bit more punch was able to hold the Ducks at bay.

With Jordan Dail doubling back in the circle for the Ducks, the Cowgirls touched the lefthander for a run in each of the first two innings.

But as Burks had threatened, Oregon’s bats came alive in the third inning for a run on a walk, a single and a sacrifice fly.

In the home half of the fourth the Ducks rallied for three runs and could have done more damage leaving a pair of baserunners in scoring position after taking a 3-2 lead.

Out came the big boppers for the Cowgirls. Samantha Show led off the inning with a bomb to left and Oklahoma State tacked on another to re-take the lead 4-3 then in the seventh Sydney Pennington launched a two-run jack and pitch hitter Sydney Springfield went solo.

It was a script Oregon tried to follow in the bottom half of the frame. Rachel Cid’s two-run clout brought home Haley Cruse and Annalisa Williamson roped an 0-1 pitch over the left field wall to bring the Ducks back within a run.

In a cruel irony it was Burks who was victimized on a 2-2 pitch to literally send the Ducks down swinging.

The night cap was much the same. With Oregon’s depleted roster it was up to walk on Kailey Krueger to take the circle in an attempt to salvage one game of the series.

A freshman from West Linn, the right hander battled through seven innings and despite giving up a dozen hits kept the Cowgirls mostly in check except for a six run third inning.

Her teammates gave her first inning 2-1 lead and then rallied back with a run in the third and three in the fourth to bring Oregon within a run at 7-6.

Oklahoma State answered with a pair of runs in the top of the fifth to sweep the day and the series.

With a current record of 11-9 Oregon can’t afford to let the disappointment linger with conference play beginning next weekend against the Arizona Wildcats in Tucson. The Ducks return to the Jane to host the Washington Huskies on Saturday, March 23 at 1:00 pm.