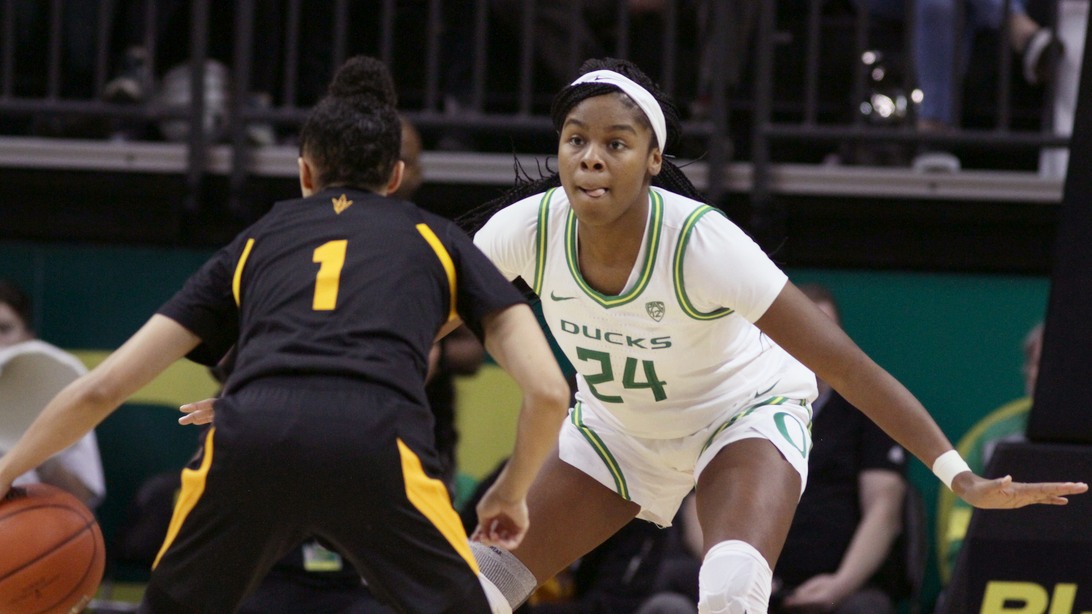 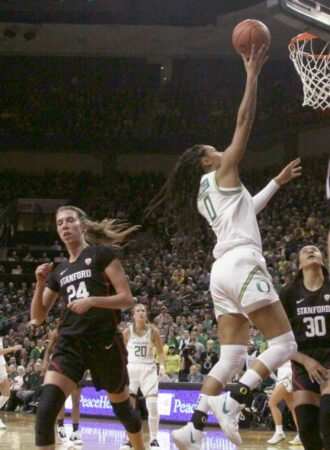 Arizona: Friday night in Eugene against the Ducks, Arizona played a competitive game in the first and fourth quarters. However they were outscored 21-12 in the second quarter and 33-16 and the third in a 85-52 loss. Aari McDonald was aggressive the entire game but turned the ball over seven times in the defeat. That aggressiveness would carry over to the next game against Oregon State. McDonald would score 22 points on 8-of-23 shooting from the floor in an overtime win. The 65-58 victory was the first road win over a top-10 team. Next up they travel to Seattle to face the Huskies Friday and then to Pullman to face the Cougs Sunday.

Arizona State: The Sun Devils suffered a two-point loss in Corvallis against the Beavers Friday. Robbi Ryan scored 20 points in the defeat, doubling her season average. Sunday against the Ducks, it was a chippy, physical game which has played in the favor of Arizona State this season. However this game was all Oregon as ASU would be blown out 79-48. The rebounding battle would prove to be the biggest factor in the loss. Arizona State was outrebounded 32-25 and they gave up 12 offensive boards resulting in 12 second chance points. Next up they face Washington State Friday and Washington Sunday on the road.

California: It was another rough week for Cal women’s basketball. Friday night the Bears would drop a narrow contest with USC 75-67. Jaelyn Brown continued her excellent play with 22 points, eight rebounds and seven assists. Sunday was another close call but fell short in an overtime loss hosting UCLA 74-70. Cal was outstanding on the glass, pulling in 55 rebounds on a day where neither team shot well. This week the Golden Bears will travel to Colorado Friday and Utah Sunday.

Colorado: The losing streak continued for Colorado on the road in Washington last week. Friday night against Washington State, the Buffalo were never able to heat up shooting the ball only making 23-of-62 shot attempts in a 69-59 loss. The shooting woes continued Sunday against Washington as they shot 36.7 percent from the field and 26.7 percent from deep in a 61-52 loss. They will get to stay in Boulder this week and host Cal in a very winnable game Friday before hosting Stanford on Sunday.

Oregon: The Ducks were playing like a team with something to prove last week. Hosting the Wildcats Friday, Ruthy Hebard was a scoring machine in the post. She totaled 22 points on just 13 shots and was a major contributor to Oregon’s 42 points in the paint. Sunday afternoon was a revenge game for the Ducks as they were able to avenge their lone conference loss. The win came in a heated contest that even had Sabrina Ionescu pick up a rare technical foul. Jaz Shelley and Erin Boley were lock in shooting the ball, combining for 8-of-10 from beyond the arc and 28 points. Oregon has now won 10 straight and will head to Southern California to face UCLA Friday and USC Sunday. 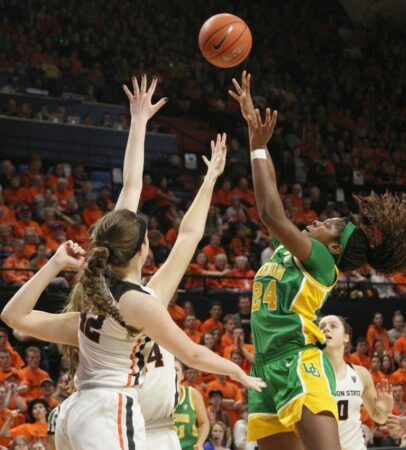 Oregon State: The Beavers were able to battle back from an early deficit to pick up a win against Arizona State on a Mikayla Pivic buzzer beater 64-62. Destiny Slocum made both of her three point attempts, on her way to a team high 20 points. Sunday the Wildcats were in town and it was a back and forth battle that needed extra time to crown a victor. The Beavers won the battle on the boards and held Arizona to a poor shooting performance but would lose the hard fought battle. The next two games will be on the road against USC Friday and UCLA Sunday.

Stanford: In a battle of two of the top teams in the Pac-12 the Cardinal lost a close match-up with UCLA 79-69. Stanford went cold in the second quarter, only scoring nine points in what would prove to be the difference maker. They made up for the loss with a 20 point victory against USC Sunday. It was a defensive victory as USC was held to under 30 percent shooting from the field. Now at eighth in the polls the Cardinal slipped two spots with the loss. They have a tough road trip ahead, traveling to play Utah Friday and Colorado Sunday.

UCLA: The Bruins moved up three spots in the polls and now sit at seventh in the country after a big win against Stanford Friday. The upset on the road was a huge boost for the confidence in this team. They may have suffered a bit of a hangover against Cal Sunday but were able to come away with the 74-70 overtime victory. Michaela Onyenwere combined for 50 points in the two road victories. It will be a big week for the Bruins as they host Oregon Friday and Oregon State Sunday.

USC: The win against Cal on Friday was highlighted by Angel Jackson scoring a career high 19 points as she returned the area in which she grew up. They were not able to keep up with Stanford Sunday after going down 28-6 in the first quarter. The Trojans are now 4-8 in conference play and host Oregon State Friday and Oregon Sunday.

Utah: The Utes picked up to huge road wins against the Washington schools last week. Friday against Washington, Brynna Maxwell had a big game with 16 points and seven rebounds. Sunday Utah shot the ball well as team against Washington State, accumulating a 51.9 field goal percentage. They’re now seventh in the Pac-12 and will face off against Stanford and Cal at home this week.

Washington: Friday night the Huskies hosted Utah and could not shoot the ball efficiently enough to pick up a win. Although they were able to score 30 points in the paint they were only able to make four shots from three point range. They were able to snap the nine game losing streak against Colorado Sunday. The Huskies jumped out to an early lead and were able to hold on late for the win. In Jody Wynn’s first season as head coach the Huskies are 3-9 in Pac-12 play and are near the bottom of the conference. They travel to play two ranked opponents this week in Arizona Friday and Arizona State Sunday.

Washington State: The Cougars were able to pick up a much needed win against Colorado Friday. After only scoring seven points in the second quarter, they were able to hold the Buffaloes to eight points in the third quarter and then exploded for 28 fourth quarter points to pull off the comeback. In Sunday’s match-up with Utah, the Utes we able to outshoot the Cougars throughout the game. Ula Motuga scored a season-high 14 points after missing the last two games with an injury. Washington State travels to play Arizona State of Friday and Arizona Sunday.