Changes At The Top For Oregon Track & Field

HomeFeaturedChanges At The Top For Oregon Track & Field

Changes At The Top For Oregon Track & Field 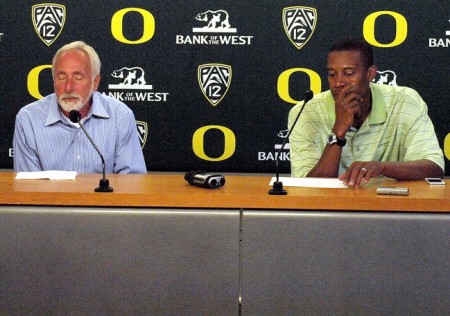 Bill Hayward, Bill Bowerman, Bill Dellinger – the names of the men who have headed the storied Track & Field program are legendary.

Vin Lanana in his seven seasons at the helm the Ducks have won 6 consecutive men’s conference titles and four straight women’s championships, not to mention a total of six national championship teams in cross country and indoor track & field and it’s clear Lanana belongs in that select company and Tuesday the University of Oregon announced Lanana would be stepping aside as Director of Track & Field to focus on long term projects for both the University and Oregon Track Club.

EUGENE, Ore. — Using bold strokes to paint a picture of the future of track and field both locally and nationally, Vin Lananna will transition into a larger role that will benefit the entire University of Oregon and TrackTown USA, while Robert Johnson will be elevated to head track and field and cross country coach, University of Oregon Director of Athletics Rob Mullens announced Tuesday.

“This reorganization and promotion within our track and field staff has been under consideration for some time,” said Mullens. “These moves will allow the University of Oregon and TrackTown USA to continue to lead the nation in the sport of track and field and recognizes the positive growth in both.

“Vin will now be able to focus his time and energy pursuing large-scale national and international track and field events for our community and ensuring that Hayward Field remains the premiere outdoor track venue in the United States. At the same time we are extremely happy to be able to retain and promote Robert Johnson, who has developed into one of the best and most sought-after coaches in the country.”

Johnson, who recently finished his seventh year at Oregon and his third as associate head women’s coach, has helped lead the remarkable resurgence of a women’s program that has won three straight NCAA Indoor national titles and four consecutive Pac-12 championships. The Duck women have also finished as the national outdoor runners-up four years in a row.

“I am thankful and humbled that Rob Mullens and Vin Lananna have blessed me with this opportunity,” said Johnson. “There is no other college in the nation where there is a greater honor to be the head track and field coach than the University of Oregon.

“As the caretaker of the program, I am excited to be able to continue to work with our outstanding student-athletes and shape and mold young lives.”

Lananna, who just completed his seventh year as Oregon’s head coach, will remain as associate athletic director and will oversee the track and field program as that sport’s administrator. He will continue to oversee the Oregon Track Club Elite, whose postcollegiate athletes have now produced an impressive collection of Olympic medals, world champions and American champions under Lananna’s direction.

He will also assume an expanded role with TrackTown USA as the nation’s best running community looks to expand its footprint both nationally and internationally under his leadership.

“Just as Bill Bowerman connected the many strands that bind the University of Oregon to the numerous stakeholders in this track and field community, it is our hope that this restructure will help to solidify TrackTown as a leader for the future generations,” said Lananna. “I am very excited about the opportunity to build TrackTown, while at the same time administering to the needs of the Oregon track and field program.”

Recently, Johnson has coached English Gardner to the U.S. junior women’s record in the 100 meters (11.03) as well as NCAA titles at 100 meters and the indoor 60 meters. He has also mentored three different national championship 4×400 meter relay teams. One of his first recruits, 400 meter record holder Keshia Baker, was a gold medalist in the 4×400 meter relay for Team USA at the 2012 London Olympics.

In his seven seasons, Johnson’s student-athletes have broken all but one indoor and outdoor school women’s record in the sprints, relays and horizontal jumps. On the men’s side, Johnson coached Mike Berry break the school’s 41 year-old record in the 400 meters as a freshman in 2011. Berry has since improved his time to 44.75.

“This is something I have wanted to do for some time; Robert Johnson and I had been discussing an increased role for him and I have decided that this is the best time,” said Lananna. “In our new roles, we will continue to work together to make Oregon the best track and field program in the country.”

Lananna was named the 2012 Pac-12 men’s and women’s coach of the year for the third time at Oregon and was previously honored as the 2007 and 2008 national men’s cross country coach of the year. He also served as Team USA’s head coach for the 2011 IAAF World Championships, and was the co-chair for both the 2008 and 2012 U.S. Olympic Team Trials, hosted at Hayward Field.

“This evolving position allows me to concentrate and focus on the big picture, including building a strong Local Organizing Committee with all of our partners, in order that we will continue to bring big, exciting events to our fans here in TrackTown,” said Lananna.

Johnson becomes just the sixth full-time track and field coach in the history of the Men of Oregon, one of the most storied collegiate track and field programs in the nation, and the seventh for the Duck women.

Note: Hired in 1904, Bill Hayward was Oregon’s first full-time head track & field coach
Note: Oregon did not have a head coach during the 2005 outdoor season

Note: Oregon did not have a head coach during the 2005 outdoor season