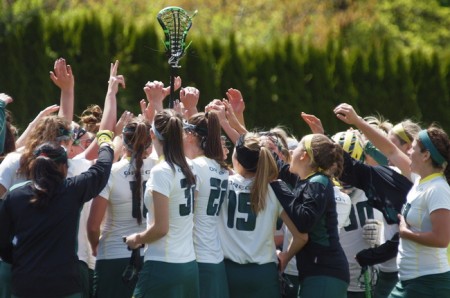 The Oregon Ducks women’s lacrosse team tried to send their seniors out with a win, but came up just short on Sunday falling to the Colorado Buffaloes in sudden-death triple overtime, 9-10.

Seniors Sami Kiser, Nikki Puszcz, Hayley Milner, Chelsea Randel, Erika McCool, and Caroline Federighi were honored, arm in arm with their families, before the start of their last game at Papè Field.

The game was one of runs and droughts. The Ducks scored a quick goal before Colorado tied the game at 1-1. Junior Olivia Pyne then scored the next three goals to put the Ducks up 4-1.

“They tried to take away Shannon, and Olivia found a seam and recognized that (it was) her day to shine,” said head coach Jen Beck. “I thought she did an excellent job.”

Then began a nearly 20 minute drought by the Ducks while Colorado scored four goals of their own to take the lead 5-4 before Pyne scored a goal with 12 seconds to go before the half. Oregon nearly scored another quick goal but the half ended with the teams deadlocked at five.

The Ducks began the second half with another scoring drought, characterized by missed opportunities and some clumsy ball handling. Oregon felt that they had the situation in hand, but “It was unlucky what happened today,” noted goalie Caroline Federighi. “We were able to have a body a majority of the time on a player running down the field.”

After falling behind 5-8 at the 13:40 mark, the Ducks put together a 3-0 run of their own to tie the game at 8-8 with 6:36 to go. Neither team scored in regulation after that, although Oregon squandered their chances to put the Buffaloes away.

“I think we just made some careless mistakes during the regular game that caused it to go into overtime, and we’ve just got to make sure we’re taking care of those mistakes,” said Oregon coach Beck.

The game went into overtime, which comprises two 3-minute periods. Colorado’s Johnna Fusco scored a goal with 0:43 left in OT, but Casey Brogan tied the game up again for the Ducks with 0:10 to play.

Johnna Fusco led all Buffalo scorers with five goals on the day.

“I think we got humbled by a team we should have beat,” said Federighi, “but it’s all about the tournament.

Added coach Beck, “We’ve got a great ride ahead of us, and the team is super fired up and ready to go.”

Oregon’s Mountain Pacific Sports Federation tournament run begins in Denver on Thursday, May 1, at 6 p.m. (PDT) in a quarterfinal matchup with the USC Trojans.