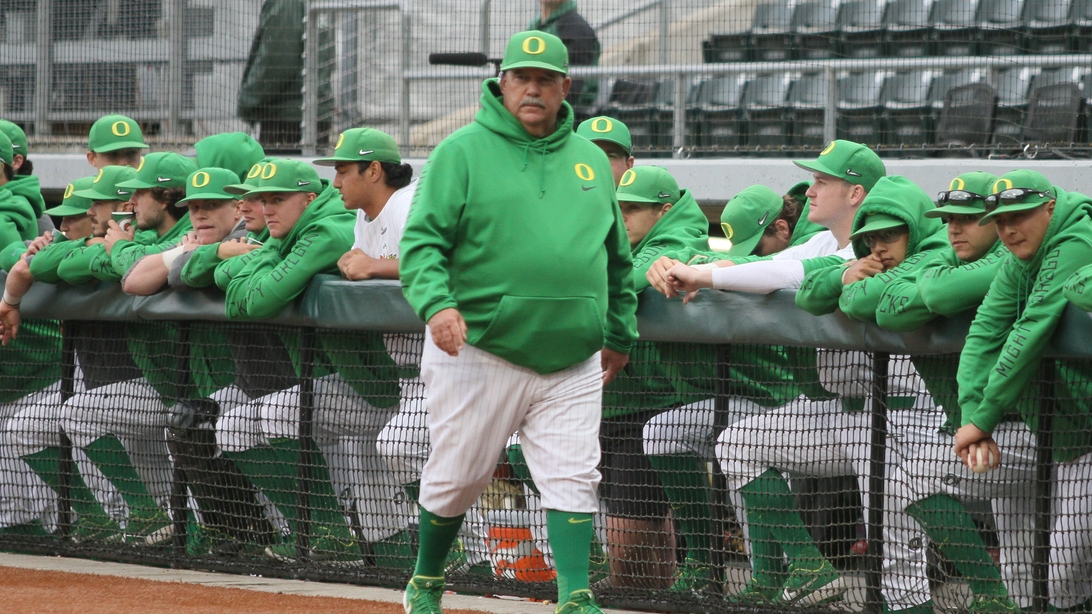 One pitch, one inning and a soggy senior send-off provided a fitting end to the 2019 Oregon baseball season as the #1-ranked UCLA Bruins sent the Ducks into the off season without an NCAA invitation for the fourth straight season.

Not that Oregon had much to hang their hats on coming into the series but at least in theory a sweep of the Bruins could catch the selection committee’s eye.

Unfortunately there wasn’t much to see except a pattern that has repeated itself throughout the 2019 campaign – the Ducks couldn’t combine enough pitching and enough hitting at the same time to stay out of the loss column 4-2 and 6-5 before Saturday’s finale was scrubbed by rain.

Oregon pitcher Robert Ahlstrom deserved a better fate in Thursday’s opener, going toe-to-toe with the Bruin ace Ryan Garcia for seven innings. Tied at two after scattering eight hits but striking out nine UCLA batters with only one walk, Ahlstrom yielded to Ryne Nelson with one out and a runner on first in the top of the eighth.

A low and away first pitch fastball from Nelson to the left handed Michael Toglia was still rising as it cleared the left field wall and ricocheted off the light pole, lifting the Bruins to the 4-2 victory.

Game two turned sour when the Ducks’ Brett Walker couldn’t get out of the third inning , giving up five hits, a pair of walks and six earned runs before Cole Stringer could stop the wreckage. Oregon rallied back with a pair of runs in the third and fourth and pulled within one in the eighth with Stringer giving a solid account of himself, fanning five and allowing just two hits in 6.1 innings of work.

It was small consolation and any opportunity for the Ducks to close the season on an uptick washed away in the rain on Saturday.

With the two losses the Ducks end the year ninth in the Pac-12 standings with a record of 10-19 in conference and 27-29 overall.

After recording a second straight sub-.500 season and without an NCAA tournament appearance since 2015, the program is clearly at a crossroads with head coach George Horton.

In his 11th season at the helm, Horton did himself no favors by elevating the program and setting expectations perhaps unreasonably high too quickly with a series of NCAA appearances that included the Ducks hosting a Super Regional in 2012 and a regional in 2013.

But a trip to Omaha remained tantalizingly just out of reach and the Ducks have seen their fortunes slip substantially in the intervening years. Both the University and Horton hold an option on the final year of the skippers’ contract, leaving Oregon Athletic Director Rob Mullens with a difficult decision on his hands.

Horton didn’t speak with the media after Saturday’s game was cancelled but a university spokesman indicated Horton hoped to return to work with a highly regarded incoming class of recruits and a returning core of youngsters.

Horton’s record of 373-278 at Oregon is nearly 100 games over .500 and with a lifetime mark better than 500 games over break even at 1089-543 and with a handful of players in the major leagues, Horton probably has earned the final year of his deal before riding off into the sunset. But the harsh reality is the program is need of a reset and at age 65, it will likely be left up to someone other than Horton to take on that task, perhaps forcing the hand of Mullens a year earlier than either he or Horton would have preferred.

Mullens has until June 16 to exercise the University option and Horton would have until June 30 to agree to another year in charge of program.