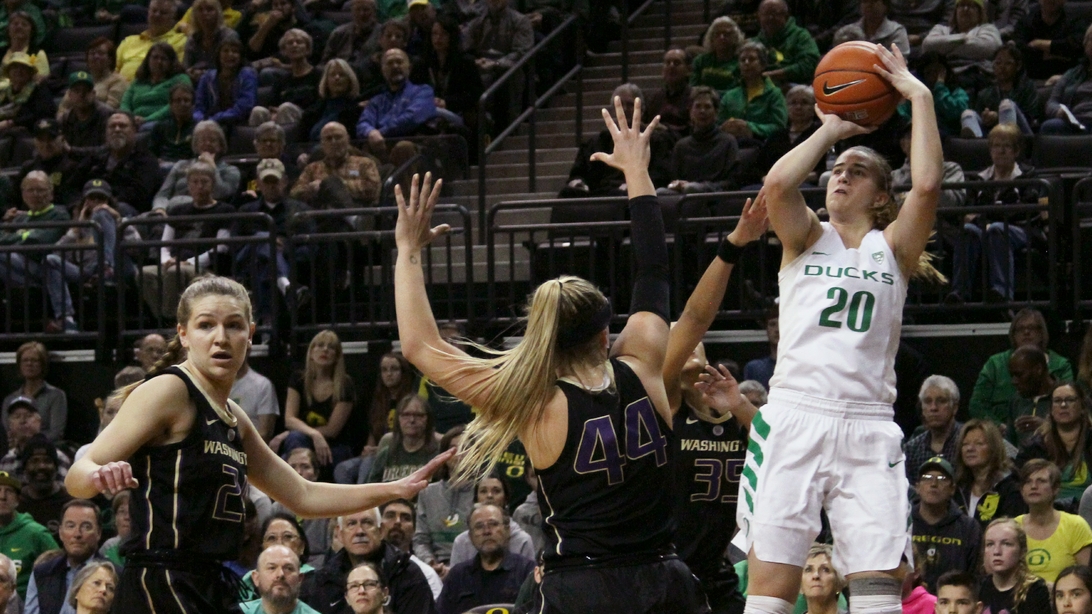 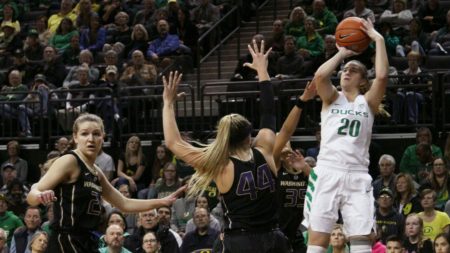 Erin Boley scored a career best 28 points to lead the Oregon Ducks to a 84-71 win over the Washington Huskies to open Pac-12 play Friday evening at Matthew Knight Arena.

The sophomore transfer from Notre Dame netted 19 of Oregon’s 23 first quarter points as the Ducks opened up a 17-point lead and threatened to run the visitors out of the gym in the early going.

The tables turned in the second quarter with the Huskies putting together a run of 18 straight points and trailed the Ducks by only one point at the half, 38-37.

After the break, Oregon opened up a six point lead in the third quarter and expanded the margin to double digits as the fourth quarter wound down.

“(Washington) is a good team that was hungry,” said Oregon head coach Kelly Graves. “They play us well … They made some tough shots tonight.”

Fortunately for the Ducks so did Boley, connecting on 10 of 14 shots from the field including 8 of 12 from behind the arc.

“I attribute a lot of that to being surrounded by great players that are able to get me the ball,” Boley said. “I’m open because they have to take away our other great scorers.”

“It was just coming to her and our kids are smart enough to feed the hot hand,” said Graves.

Sabrina Ionescu added 20 points and a team leading 10 assists and Satou Sabally contributed 19 points and a game high 12 rebounds for the Ducks.

With Ruthy Hebard suffering an uncharacteristically poor shooting night (4-12) from the floor, Washington outscored Oregon 34-20 in the paint.

With the win Oregon’s record improves to 12-1 on the year and 1-0 in conference play. Washington slipped to 7-7 overall and 0-2 in the Pac-12. The Ducks next host Washington State with the opening tip set for 3:00 pm on Sunday. The game will be televised by the Pac-12 Networks.