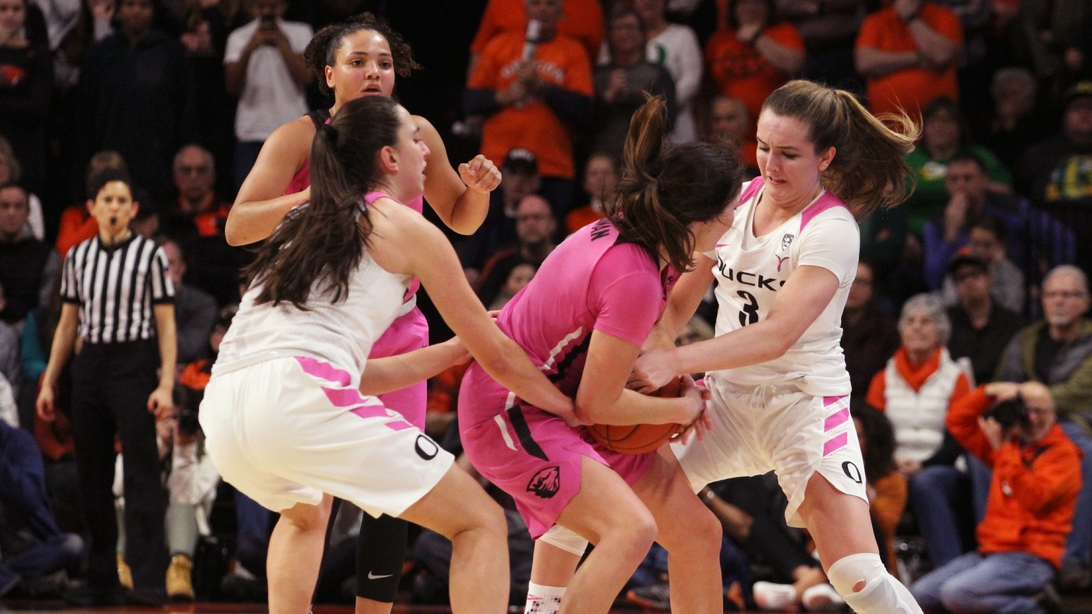 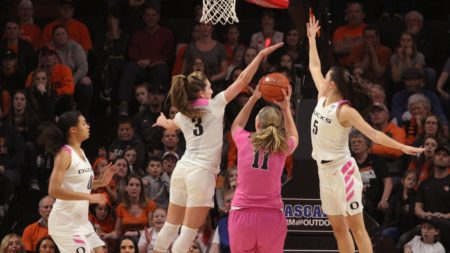 No team not named Stanford has gone through the conference season 18-0 and that remains the case after the second Civil War in Corvallis.

Oregon State made the plays down the stretch to hang on to a 67-62 win over Oregon in front of a sold out Gill Coliseum Monday night.

The Beavers moved to 11-3, good for a second place tie with Stanford and 21-5 mark overall. Meanwhile, the Ducks dropped to 24-2 overall, but still have a strangle hold on the Pac-12 standings. It was Oregon’s first loss in conference play and it holds a two game lead on the Beavers and the Cardinal.

As for as the NCAA tournament is concerned, this was a much bigger win for Oregon State than it was a loss for the Ducks. Oregon will still be in line for a 1-seed in the West Region, host the first two rounds with a trip to Portland and the Sweet 16 waiting.

With the win, the Beavers might have solidified hosting the first two rounds in Corvallis and then who know where they might be sent.

Aleah Goodman came off the Beaver bench to lead her team with 22 points thanks to four three-pointers. Destiny Slocum added 20 points and Mikayla Pivec poured in 11.

As for the Ducks, uncharacteristically no one had a typical night shooting the ball and that turned out to be their ultimate downfall. Oregon shot a season-low 35.8 percent on 24-of-67 from the field and just 5-of-22 from three-point range.

Sabrina Ionescu led the Ducks with 21 points with Erin Boley and Satou Sabally each adding 12. Ruthy Hebard managed eight points, but missed most of the second quarter and the entire second half due to a knee injury. She was seen icing her knee on the bench, but the nature of the ailment is unknown and her status for the season also is unclear.

If Hebard is out for the season, Oregon will have a major adjustment ahead of it as she is the premier power forward in the country. It won’t be easy to replace her 16.5 points and nine rebounds per game or what she provides on the defensive end.

The Beavers led by as many as 11 points in the second quarter before the Ducks closed the gap to six at the break with a Maite Cazorla trey and a lay-up from Boley.

The Ducks started to pull it together in the third quarter. Ionescu’s jumper tied the game at 45-45 with 1:40 left. OSU scored the next five points, but Boley’s three made it 50-48 as the two teams went into the final 10 minutes.

Both teams buckled down on defense, but Ionescu’s jumper with 6:23 left gave Oregon their last lead at 52-50. The Beavers went on a 7-0 run and Oregon didn’t score again until Taylor Chavez made her only three of the night with 55 seconds left.

The last minute consisted of Oregon fouling and playing catch-up, but Ionescu almost made a miraculous four-point play when she was fouled shooting a three with 7.2 seconds left. But her attempt bounced off the rim. She did make all three free throws, however to make it a one-possession game at 63-62.

Slocum hit both of her charity shots to make it 65-62, but it was still a one-possession game and the Ducks still had a chance. The Beavers had one foul to give and they meant to foul Ionescu on the in-bounds pass, but the Duck All-American travelled for Oregon’s third turnover for the entire game.

Unfortunately, that turnover came at the worst possible time for the Ducks.

Oregon will now come back to the friendly confines of Matthew Knight Arena this Friday when UCLA comes to town. The Bruins are 16-10 overall, 9-5 in league action and on that proverbial bubble for the NCAA tournament.