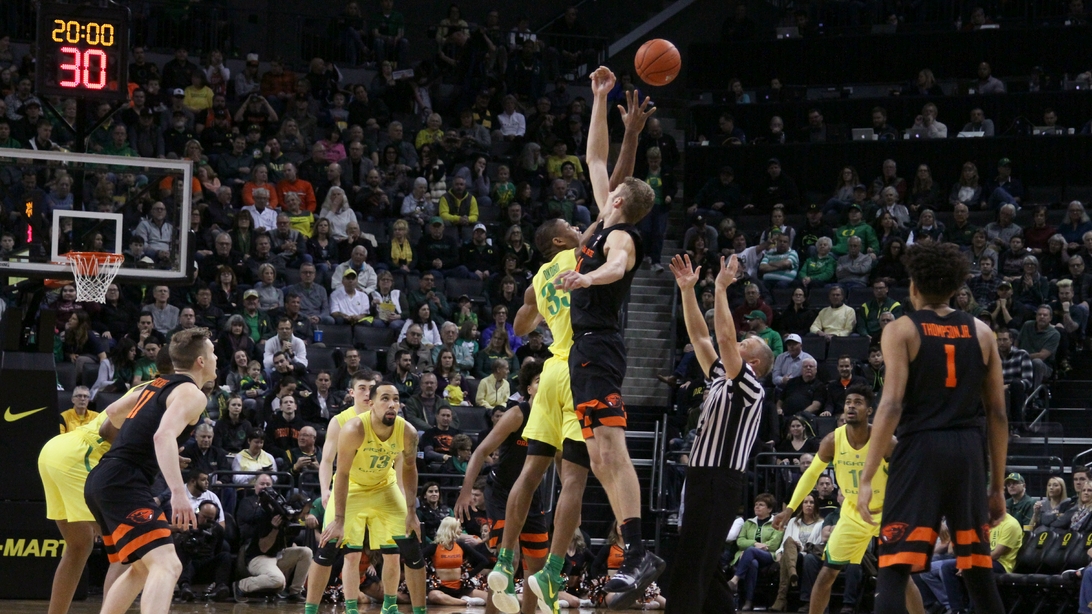 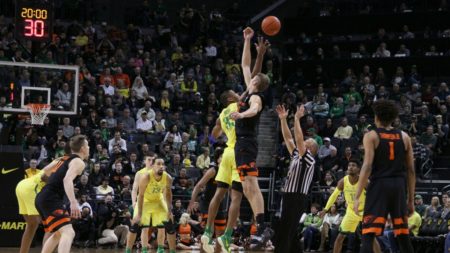 If there was one thing the Ducks showed in the first Civil War this season is that they don’t quit.

Oregon erased an 18-point deficit early the second half, but the Beavers were able to escape Matthew Knight Arena with a 77-72 win over the Ducks in front of 11,204 fans.

Those fans were treated to a great basketball game that saw the lead change four times in the last two minutes. But it was Oregon State that managed to hit all six of their free throws in the last 45 seconds of the contest to hold off a short-handed Oregon squad.

When Ethan Thompson dunked it with 19:14 on the clock in the second half, the Beavers were in complete command at 43-25.

Everything was going OSU’s way, but that was when Oregon cracked down on the defensive end and began to make some threes in order to chip away at the big deficit.

The Ducks eventually turned that Beaver lead into single figures when King made an inside shot with 7:44 left to make it 62-52. Then White nailed a three from the right wing to make it 62-55 which woke up the crowd and it was game on.

Oregon still had a ways to go and coach Dana Altman was subbing offense for defense continually for the last 10 minutes.

Bailey, Jr. hit three from the left wing and Pritchard converted an and-1 to make it 66-63 Beavers with 5:16 left. King brought the Ducks to within one at 66-65 and Oregon took its first lead since early in the game when King made two free throws at the 3:49 mark.

The last three minutes of the game went back and forth with jump balls and alternate possessions galore.

Oregon grabbed the lead a few more times in the last two minutes, but the Beavers, who showed their experience, were able to answer every single time.

Zach Reichle hit two clutch free throws with 45.7 seconds left to give Oregon State a 73-72 lead. And finally Oregon ran out of answers and time. Down 75-72, King shot a contested three with 19 seconds left that was just short. Stephen Thompson Jr. rebounded the missed shot, hit two free throws on the other end and that was that.

This was the first time Oregon has really felt the loss of Bol Bol and Kenny Wooten.

Oregon State absolutely crushed the Ducks on the boards, outrebounding the home team by the tune of 23-11 in just the first half and 38-29 for the game.

The Beavers also shot 16-of-31 from the field and all of that resulted in a 38-25 halftime lead for OSU. They shot 51 percent from the field for the game.

The Ducks needed to off-set their lack of inside presence with great shooting from three-point range and in the first half at least, that just didn’t happen. Oregon was just 4-of-11 from long distance and just a measly 10-of-30 overall from the field. For the game, Oregon shot 38 percent from the field on 26-of-69 shooting.