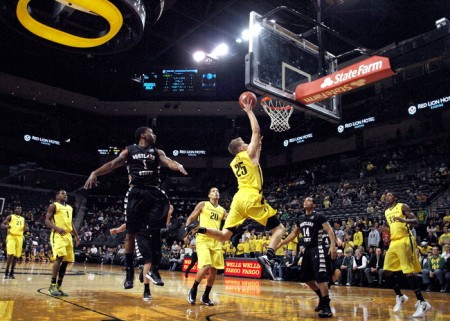 Dominic Artis – one of those freshman – led Oregon with 16 points and the Ducks picked up their second win of the young season. Carlos Emory added 15 and Damyean Dotson hit for 12 to join Artis in reaching double figures in scoring.

But Oregon could only make 9 of 24 shots in the second half and the Vikings took advantage of the opportunity, closing to within nine points midway through the second stanza.

E.J. Singler’s three-ball from the corner pushed the lead back to double digits and Portland State would never again get closer than the final 11-point margin.

“I liked how we came out and played with some aggressiveness and some passion and some enthusiasm.” said Singler of the first 20 minutes. “We got them out of what they wanted to do.”

Oregon enjoyed a 35-24 advantage on the boards against the Vikings, with an 11-5 margin on the offensive glass. For the game the Ducks connected on 27 of their 55 shot attempts for a 46.1% average including 9-19 from behind the arc.

Oregon will next host Vanderbilt, with the Commodores visiting Matthew Knight Arena this Friday. Tip off is set for 8:00 pm.