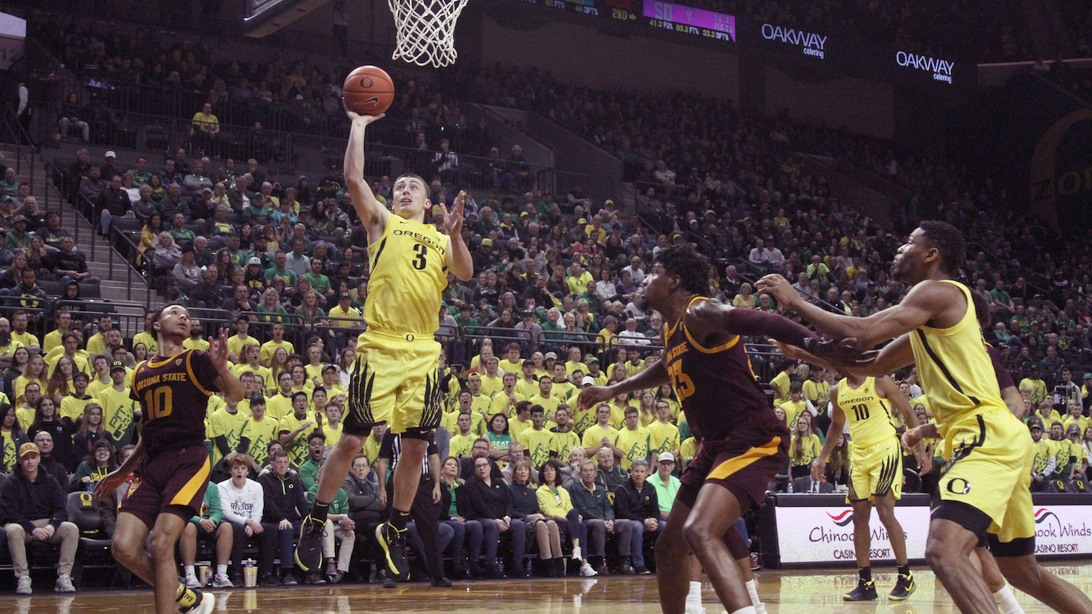 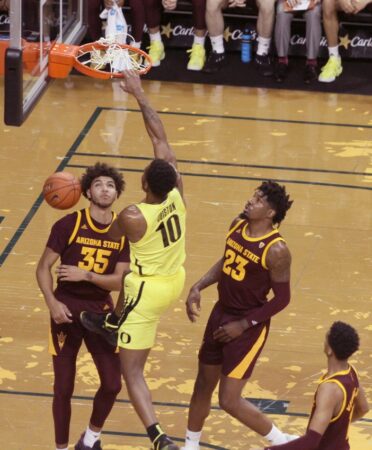 Arizona: The Wildcats are back in the Top 25 after an impressive week. Nico Mannion continued his fantastic play this season with 16 points in a 75-72 win against Washington Thursday. A late three pointer by Jemeral Baker Jr. gave Arizona the lead with 42 seconds left to seal the victory. Saturday in Pullman against Washington State, Sean Miller’s squad was able to win in an easier effort behind the great shooting of Stone Gettings. Now 23rd in the country the Wildcats look to keep the winning streak alive as the host USC Thursday and UCLA Saturday.

Arizona State: The Sun Devils only have themselves to blame for a loss at Washington State on Thursday. They committed a season-high 21 turnovers in the 67-65 loss on the road. They would however right the ship in Seattle against the struggling Huskies on Saturday. Remy Martin led the team in scoring with 19 points and Rob Edwards added 18 points going to the line 10 times in the contest. ASU is now .500 in Pac-12 play after the Washington road trip split. Next up the host UCLA Thursday and USC on Saturday.

California: After having a limited role last season, Matt Bradley has emerged as a star at Cal this season. The sophomore exploded for 25 points against Oregon on Thursday, but were not able to come away with a victory. He followed up the performance with a 23-point scoring output the following game against Oregon State, this time picking up the win at home. In his first season, coach Mark Fox has done a good job with what he has. They play tight defense and limit possessions in what seem to be hard fought battles on a regular basis. This week they embark on one of the most difficult road tips of the season, traveling to play Colorado on Thursday and Utah Saturday.

Colorado: The Buffaloes second half comeback fell short against UCLA, Thursday in a 72-68 loss. After digging themselves a hole in the first half falling behind by 12 points, they outscored the Bruins 41-33 in the second half. Colorado looked lethargic, losing the rebounding battle and also giving up 22 fast break points in the contest. The Buffs bounced back in a big way on Saturday against USC, cruising to a 78-57 win. Lucas Siewert provided a boost off the bench scoring 12 points in a career high 24 minutes. Colorado will host a Cal team Thursday that is tending in the right direction. Saturday they host Stanford.

Oregon: The Ducks were able to rally behind their leader Payton Pritchard for a hard fought road in win against the Golden Bears Thursday. Last week’s Pac-12 Player of the Week, Chris Duarte also continued his impressive play with 19 points and two steals. The following contest against Stanford, Dana Altman’s group went ice cold in the second half in a surprise 70-60 loss. Duarte and Pritchard combined for 10-42 shooting from the field as the Ducks played uncharacteristically sloppy. Following the upset Oregon has slid back to 14th in the country previously at 11th. The lone matchup of the week is the Civil War rivalry game against the Beavers on Saturday in Corvallis.

Oregon State: In a 68-63 win against Stanford Saturday, Kyler Kelly was a shot blocking machine. Not only did he record a career high seven blocks, but also broke the school record for career blocks. On Saturday Wayne Tinkle implemented a 1-3-1 zone scheme to attempt to slow down the Cal guards. The strategy did not however pay off, losing 69-67.

Stanford: Oscar De Silva was named Pac-12 Player of the Week after an impressive home stand. Thursday in a loss against Oregon State, De Silva had 22 points as well as eight rebounds, two steals and two blocks. Saturday in a upset victory against Oregon he was dominate inside scoring 27 and coming down with 15 boards. Next they will head to the mountains to face Utah on Thursday and Colorado Saturday.

UCLA: It has taken time but Mick Cronin may have the Bruins playing the best basketball this season. Thursday they upset the 20th ranked Colorado 72-68 at home. Chris Smith had his best scoring output of the season totaling 30 points. They picked up right where they left of and ran Utah out of the gym on Saturday. Jaime Jaquez Jr. had 18 points and was named Pac-12 Freshmen of the Week. The sweep has put teams across the conference on notice that the Bruins may be back. They travel to play Arizona State on Thursday and Arizona Saturday.

USC: The Trojans bounced back from a slow first half to come away with a victory against Utah on Thursday. Neither team shot over 38 percent from the field in the poor shooting performance from both schools. On Saturday Onyeka Okongwu recorded a double-double, but it would not be enough against Colorado, losing 78-57. When USC is playing well they have looked like they can play with any team, but with a young roster they remain inconsistent. They’re tied for second in the Pac-12 at 6-3. This week they travel to play Arizona Thursday and Arizona State on Saturday.

Utah: The Utes came out of the gate shooting the ball well on the road against USC. However they could not hold on as they made mistakes down the stretch in a 56-52 loss. Timmy Allen led the team with 13 points, but the Utes also had three other players score in double figures. Sunday was a different story against UCLA as the game was never really in question. Utah lost the game 73-53, and shot the ball under 40 percent as a team. Now at 3-6 in Pac-12 play they look to stay competitive and build towards the future. They remain home in Salt Lake City to face Stanford Thursday and Cal Saturday.

Washington: The Huskies season has been a disappointment so far. Although having a lot of talent on the roster they have now lost five straight games. Thursday against Arizona it was a hard fought battle but Washington struggled to get things going in half court sets. Isaiah Stewart has been there best go-to scorer and he could not get it going shooting three of 13 from the floor in a 75-72 loss. Saturday was an all-out track meet against Arizona State and fell just short in a 87-83 shootout loss. The zone defense for Mike Hopkins team that normally looks solid, could not stop ASU, allowing 32 points off the bench. This week Washington looks to stop the bleeding against Washington State on Sunday in Pullman.

Washington State: Thursday night Washington State jumped out to an early lead and were able to hold on late at home versus Arizona State. CJ Elleby has been one of the best offensive weapons this season and he was electric scoring 27 points. Saturday against Arizona he was held in check and it reflected in their offensive output. He was held to seven points on 2-of-12 shooting in a 66-49 loss. They will look to get him back on track against a Washington team desperate for a win, in a rivalry matchup at home Saturday.