Another Year Around the “O”

HomeFeaturedAnother Year Around the “O”

Another Year Around the “O”

Ninety four years is a long, long time. The point could be argued last January’s Rose Bowl win over Wisconsin represents a bigger milestone for the football program than would have a win in BCS Championship game the year before. It’s fair to note one can entertain that notion a bit more quickly when another BCS run is a reasonable expectation for 2012 season – a luxury not previously available.

Yes, beating Auburn in 2011 and having that crystal football in the Cas Center would have sent the faithful into another realm. Yet for each of the 14 years of the BCS era the consistent criticism was the championship pairing was an artificial construction that frequently employed flawed – if not nonsensical – logic that approached the surreal.

82 degrees on a January afternoon with a gorgeous sunset falling on the Arroyo Secos behind the Rose Bowl and both a 45-38 lead over the Wisconsin and zeroes posted on the scoreboard? That – ladies and gentlemen, boys and girls – was pretty real.

After faltering two years earlier against Ohio State then coming up a play short last season against Auburn, this Rose Bowl and that team were meant for each other from the beginning of the season. Dropping the first game to LSU in the Cowboy Classic gave the Ducks the luxury of keeping that January date a singular goal right to game day.

A brief late season flirtation with a return to the BCS Championship game ended with the loss to USC although even if Oregon had tied the Trojans and won in overtime, that possibility – though likely – would still have been subjected to the vagaries of the BCS selection process.

Not so for the Rose Bowl – it would be the first Pac-12 Champion against Wisconsin, the champion of the newly expanded Big 10, history in the making. It was almost like having your cake and eating it too.

As sweet a desert as it was to stand under the confetti canons and accept that bouquet of roses for the first time since the end of World War I – the view from the larger perspective may be even more remarkable.

The past 15 years has seen the Oregon athletic program undergo quite a transformation, perhaps unparalleled in collegiate sport in the breadth of the improvement across the program. Success has been extended to nearly every endeavor.

The rich history of Oregon Track & Field was built in an earlier time and crystallized into a local religion during the reign of Steve Prefontaine. The 80’s and 90’s saw individual stars come to shine at Hayward Field. but just as the football team began its ascendancy, track & field began to build the foundation for what is now under Vin Lanana one of the showcase programs in the nation. Six consecutive conference championships for the men, four in a row for the women and a pair of cross country NCAA Championships. 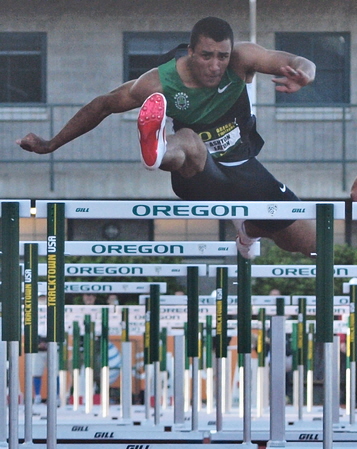 That legacy took on a new shine when alum Galen Rupp became the first American to win and Olympic medal in the 10,000m, taking the silver earlier this summer in London.

As an aside – the London Games also put the spotlight directly on one of those earlier Duck greats – Alberto Salazar – coach for both Rupp and gold medal winner Mo Farah for the Nike Project.

Another program that rocketed to the top of the pack in recent seasons is the men’s golf team. Casey Martin arrived in 2005 and has quickly turned the Ducks into a top flight program. A pair of conference second place finishes and back-to-back third place showings in the NCAA Championships has the program treading uncharted waters.

Martin added to the Duck headlines with a made for Hollywood run to the US Open in June.

Early in the 2011-12 sports year the volleyball team posted one of the all time shockers, ending then top ranked and defending NCAA champion Penn State’s record 92-game home winning streak. For the sixth time in his eight years head coach Jim Moore took the Ducks to the postseason. Outside hitter Alaina Bergsma – who was crowned 2012 Miss Oregon in the off-season – and setter Lauren Plum head a solid core of returning players who will be expected to do so again this fall.

It has been a slower process for the women’s soccer team. With established powerhouse Portland up the freeway, top players have been harder to come by. Youth will be the mantra for head coach Tara Erickson this season. Leading goal scorer Scout Libke is one of six seniors and five juniors who will have to set the tone for the youngsters – 11 sophs and 8 frosh.

Bailing wire, chewing gum and sweat was about all men’s basketball coach Dana Altman had to work with when he called his team into camp last October. Somehow, by January he had welded them into a cohesive lineup, finishing the season tied for second in the Pac-12 and one conference tournament win away from a likely NCAA invitation.

Ahead, Altman will have to do it again – mainstays Garrett Sim and Jeremy Jacob are gone as are Devoe Joseph and Olu Asholu who made significant contributions in their one season under Altman.

Carlos Emory, E.J. Singler, Tony Woods and Jonathan Loyd offer something of a nucleus but the rest of the roster will be wearing name badges for the first few practices.

On the ladies side of the court the Ducks remain caught between a past and present… with the graduation of Amanda Johnson, Nia Jackson and Jasmin Holliday bringing to a close the half court set philosophy employed by Bev Smith.

Whether Oregon has fully stocked a roster of the run-and-gun type favored by Paul Westhead is still an unanswered question and the possibility of that being the case took a significant hit with a season ending injury to point guard Ariel Thomas. Laura Stanulous – Oregon’s only senior – has the most minutes at the position but averaged only 12 minutes of playing time behind Jackson and Thomas.

The men fell just six inches short of duplicating the feat when a Kent State bloop single fell between left-fielder Brett Thomas and shortstop J.J. Altobelli, ending what was a very entertaining season for head coach George Horton and his nine.

Oregon strung together a 10-game winning streak after an opening loss and attracted national attention by sweeping Vanderbilt in Nashville.

In conference play the Ducks stubbed their toe against some of the leagues lesser lights but proved their worth winning series on the road at Arizona, Stanford and UCLA and sweeping both California and USC at home.

A heartbreak three game sweep by the Beavers in Corvallis cast a pall ending any chance for the Ducks to claim the first Pac-12 conference trophy.

But that was quickly cast aside when the Ducks were awarded a five seed and dispatched Austin Peay and Cal State Fullerton in the Regional at PK Park where – as at Howe Field post season play – was hosted on campus for the first time.

Finding their way back to within six inches of a trip to Omaha will make for an interesting season in 2013. Ace right-hander Alex Keudell has graduated and Aaron Jones – one of Oregon’s better offensive players and expected to assume the starting role at catcher – won’t return for 2013.

Horton’s pitching staff will feature returning righties – Jake Read, Jeff Gold – and lefthander Christian Jones who sat out 2012 after undergoing Tommy John surgery. Closer Jimmie Sherfy sometimes makes life more difficult for himself with bases on balls but game in and game out brought home a late inning lead when Horton handed him the ball.

The bat of Aaron Jones will be missed in what is an anemic offense but as they did last year, expect the Ducks to catch and throw the ball well behind the pitching staff, giving those bats every opportunity to cobble together a couple runs for the win.

And it was a second straight NCATA national championship for the newest kids in the 97403, Felicia Mulkey’s Acrobatics and Tumbling squad.

No slight intended to men’s and women’s tennis but they occupy a very difficult space with the SoCal schools and Stanford having such a legacy of domination. Whether the gloss of some of the other successes can rub off is an interesting question but it would be a steep climb.

The available metrics reflect the happy results. The Ducks ranked 24th in the annual Directors Cup rankings of overall program success and the highest for the given number of scholarship teams fielded, 18.  Graduation rates as measured the NCAA’s APR benchmark have trended higher but have yet to fully register the transfers out of the men’s basketball program during the transition from Ernie Kent to Dana Altman.

So now the question becomes can this feast of achievements be sustained over the longer term? Every effort is surely to be extended – one need only look at the new construction projects recently completed or currently underway – Mathew Knight Arena, the Jaqua Academic Center, a new Pape/Kilkenny complex for soccer and lacrosse that was forced to relocate thanks to the new palatial football operations building currently under construction .

There is also the matter of two open NCAA investigations. One would at least like to believe the NCAA must be near reporting their findings… but then again, they’ve had other matters to attend to.

As you can see it is a revamped DuckNews website as we begin our 8th season – just in time for what looks to be another interesting year around the “O”.