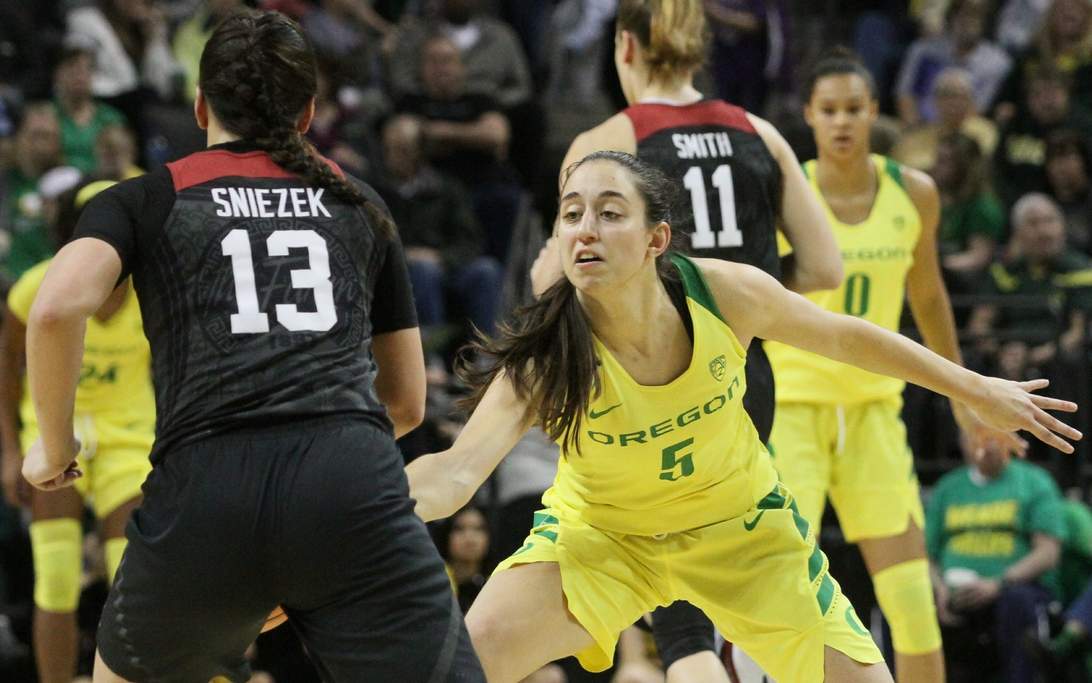 That’s all you need to know as far as the Pac-12 Conference tournament final.

The sophomore torched Stanford all game long as the Ducks avenged an early loss in a 77-57 win in Seattle. It was Oregon’s first appearance in the final and thus its first tourney championship.

Ionescu was also named the tourney’s Most Valuable Player and her 36 points were the most ever in the title game.

In the earlier matchup between these two teams in Eugene, Oregon was in control at halftime as they were were tonight. But unlike the game inside Matthew Knight Arena, Oregon was able to hold Brittany McPhee to 12 points, instead of letting her score 30 second half points in the Ducks only home loss.

This time is was Ionescu who torched Stanford. She scored 17 points in the first half and 19 more in the second half. She did it every which way, whether it was three-point bombs or driving to the hoop. Stanford’s defense had absolutely no answer for the Pac-12 Player of the Year.

One the few times Ionescu didn’t score, she was finding the open person. Satou Sabally scored 12 points, including a trio of three-pointers. Ruthy Hebard added 11 points and nine rebounds and Maite Cazorla scored 10 points and dished out six assists.

“Today we were the better team,” Oregon coach Kelly Graves said. “Defensively, we were on point. Even though it’s young leadership, we have great leadership.”

Oregon played a combination of a 2-3 zone and a 1-3-1 zone all night long. Stanford didn’t do anything offensively to give the Ducks a reason to switch to a person-to-person defense. The Cardinal did shoot 49 percent from the field, but just 4-of-14 from long distance.

“It was extremely tough,” Stanford guard Kiana Williams said of the Duck zone. “They were really long, but I thought we could have done a better job making them rotate and get better shots. We were forcing things that weren’t there.”

The Cardinal turned the ball over 16 times and Oregon managed to score 24 points off of those miscues.

It was a close game after one quarter as Oregon led 18-17. But the Ducks’ defense went up a few notches as they allowed the Cardinal just seven points in the second quarter as Oregon took a 31-24 halftime lead.

“Defensively, we were on point,” Graves said. “It was that way for the entire tournament.”

Oregon showed early on in the third that a second half collapse just was not going to happen this time against Stanford. Ionescu scored 11 in the quarter, including an and-one and a deep three from the right corner.

“We had some unfinished business,” Ionescu said. “We were ready to come out and play great basketball. Back at home, that loss stung us. It taught us a lot. We adjusted well and played with intensity.”

Hebard was double-teamed for most of the night, but it just shows how dangerous the Ducks can be. The double team leaves someone open from the outside and whether it’s Ionescu, Sabally, Cazorla or the program’s all-time three-point leader Lexi Bando, Oregon is bound to make the opponent pay.

Tonight it was Ionescu, but it could be a number of other players the next night. Oregon shot 11-of-24 from long range and 50 percent from the field on 28-of-56 shooting.

Stanford just had three players in double figures with Alanna Smith leading the way with 17. McPhee’s 12 points and Williams added 11.

Bando and Hebard were named to the all-tourney team, along with UCLA’s Jordin Canada and Monique Billings. Williams from Stanford was also honored.

Now Oregon will wait to see if it gets a 1 or 2 seed in the NCAA tournament. Whatever seed the Ducks receive, at 30-4, they’ll host for the first time since Matthew Knight Arena opened in 2010.