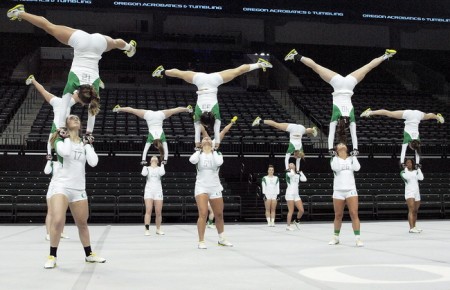 The three time defending National Collegiate Acrobatics and Tumbling Association champion Oregon Ducks opened the 2014 season with a 280.20 to 274.38 win over the Baylor Bears Thursday evening at Matthew Knight Arena.

Setting aside any opening day jitters and dealing with a late injury that forced head coach Felicia Mulkey to re-script the game plan, the Ducks won each of the six events, often handily.

“I like the chemistry of this team… you just can’t shake em,” said Mulkey. “We had an injury last week and we changed everything. All that you saw was kind of new. We had to change our entire toss event … they are physically able but chemistry is just phenomenal.

“We have the most amazing group of upper classmen … selfless leaders who lead by example.”

“We literally had no doubts going in to any of the events,” said junior Tara Lubert.

The Ducks extended their unbeaten string to 22 consecutive matches.

Next up for the Ducks, Quinnipiac and Azuza Pacific visit Matthew Knight Arena on March 10 for a three-way meet beginning at 7:00 pm.