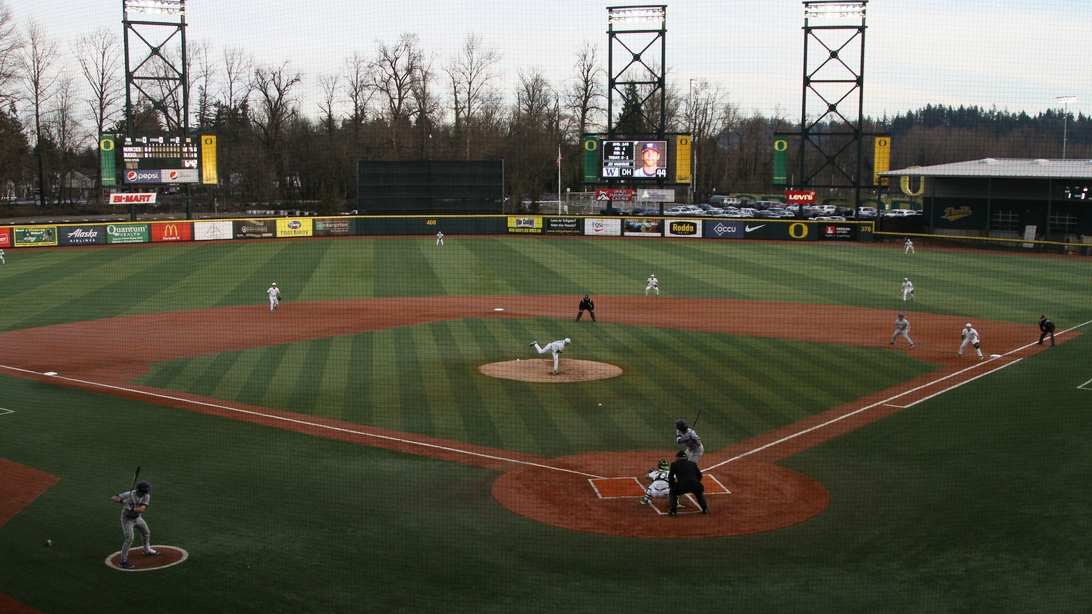 It’s a new era for Oregon baseball as Mark Wasikowski, or Coach Waz as his players call him, where he hopes to bring back success to the program.

After the Ducks decided not to renew George Horton’s contract last year, Athletic Director Rob Mullens settled on a familiar face. Wasikowski was in Eugene as Horton’s assistant 2012-17 before moving on to Purdue where he quickly turned the Boilermakers around.

Purdue was 10-44 the season before Wasikowski took over and in that first season, the Boilermakers racked up 29 wins. The improvement continued in 2018 as Purdue finished with a 38-21 record, good for second place in the Big Ten and they made their first NCAA tournament since 1982.

Oregon is hoping for a similar upward trajectory.

The Ducks haven’t been in the post-season since 2015 and haven’t hosted a NCAA tourney game at PK Park since 2013.

Wasikowski’s job is to see those streaks are ended as soon as possible, but it might not be right away. Oregon is picked to finish ninth in the Pac-12 (11 teams) by the media. But as long as the Ducks improve and see a light at the end of the tunnel, the 2020 season will be considered to be a success.

As usual, pitching will dictate a lot of how this season goes as the Ducks have never been known as an offensive juggernaut. When Oregon is good, it’s because they are dominating on the mound and a reliable defense playing behind those pitchers.

Getting Kenyon Yovan back on the mound as soon as humanly possible would go a long way to determining exactly how good the Ducks could be. Yovan was one the best pitchers entering the 2019 season, but a shoulder injury in the season opener ended his year prematurely.

Yovan was drafted by the Angels despite the health concerns, but the redshirt junior elected to return to Eugene. He will begin the season in the bullpen as he builds up arm strength, according to Wasikowski.

“I don’t think he’s built his pitch counts up enough to where it’s an effective start situation,” Wasikowski said. “His mentality is off the charts. The good news is that he’s healthy.”

Yovan says he’s ready to get the season underway.

“I’m just itching to get back out there. I’m ready to go,” he said. “I stayed here this summer, worked out a lot and get as strong as I can be with the time I have.”

The first-year coach also said that Yovan is dangerous with the bat and to expect him in the middle of the order early in the season.

Cullen Kafka will take the mound when the Ducks face Minnesota Feb. 14 in the Angels College Classic at Grand Canyon University in Arizona.

“I’m excited and ready to go,” Kafka said. “Things feel different. Not only with the new coaching staff, but with the freshmen and the JC transfers. There’s just a different feel overall.”

Also listed as starters are Peyton Fuller vs. San Diego, Robert Ahlstrom vs. Pepperdine and Brett Walker vs. Grand Canyon to end the first handful of games.

“You live and die with the pitching. The key usually is the pitching and more specifically the mentality those guys are bringing to the table,” Wasikowski said. “We’ve seen real progress with the staff. They’ve got good arms.”

As for the starting lineup, Wasikowski wants to have a permanent starting eight players and not stray from those all that often. He wants them to build up a chemistry on the field and know that if they make a mistake, they won’t be yanked and not see the field for the next week.

“I want people to play with confidence, mentality and the way you do that is to give them a little rope to fail,” he said. “That’s the way our staff has decided to go with it, have some stability and show the players some confidence.”

“There’s a lot of talent that’s working hard. I feel that we can accomplish anything as long as we keep working hard,” Novitske said. “Coach Waz has set the standards high. He wants to win.”

There’s a tight competition at the catcher position with Sam Olson, Jack Scanlon and Aaron Zavala, who will probably spend most of his time at third, is all in the mix.

“Right now, Sam Olson would be the starter if the season began today with Jack the No. 2 and Aaron No. 3,” Wasikowski said. “But Sam has been consistent and emerged since the spring and will the starter on Day 1.”

The Oregon baseball program has several plans to honor the family of former player JJ Altobelli, who lost his father John, step-mother Keri and his 14-year old sister Alyssa in a helicopter accident that also claimed the life of Kobe Bryant and his daughter Gianna Jan. 26.

Oregon will observe a 14-second (John’s uniform number at Houston and at Orange Coast College) moment of silence before its season opener and in the home opener Feb. 21. The Ducks will also wear decals that have the victim’s initials on the back of their helmets. JJ Altobelli, his fiancé Carly and his 16-year old sister Lexi will also be honored at a home game later this season as well.

A pair of funds have been set up to help financially support the family. Donations can be made at the following links.