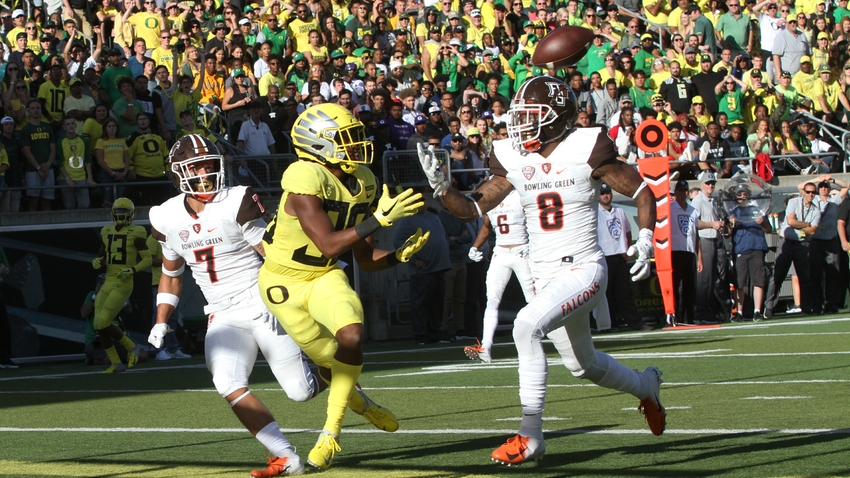 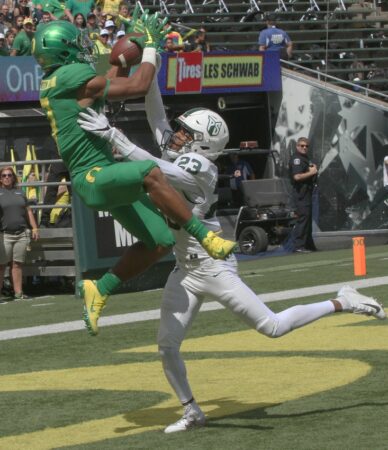 The most maligned and talked about position on the Ducks last season was the wide receiver corps. This particular group had talent up and down the depth chart, but for some reason, Oregon’s receivers had a severe case of the drops that never really went away.

And given the fact that the quarterback is the one of the best in the nation, every drop was magnified.

Obviously this didn’t go unnoticed by the coaching staff, so the receiver position was a point of emphasis is recruiting last winter. Head coach Mario Cristobal scored big time on the recruiting trail, which, he hopes, leads to the Ducks scoring big time on the field in 2019.

Most of those receivers are back for another year, but a talented freshmen class coupled with a senior transfer could be the sure for what ailed the Ducks last season. If so, Justin Herbert can make his plans for a trip to New York in December.

The one receiver that could be counted on consistently last season was Dillon Mitchell, who led the team with 75 catches for 1,184 yards and 10 touchdowns. But unlike Herbert, Mitchell decided to forego his senior season and enter the NFL draft early and his now catching passes in Minnesota as a seventh round pick.

If he didn’t leave Eugene, that might have meant there wasn’t a spot for Penn State senior transfer Juwan Johnson. At 6-4 and 231 pounds, Johnson provides that “big” receiver Oregon hasn’t had in quite some time. It’ll be nice for Herbert to be able to just throw the ball up and watch one of his guys outjump the defense to haul down a pass, preferably in the end zone.

At Penn State, Johnson caught 25 passes last season for 352 yards and a touchdown. As a sophomore, he caught 54 passes for 701 yards, which earned him an All Big Ten honorable mention.

Unlike last year where depth at receiver was a major concern, this year promises to be different, although that depth will be tested early on. Oregon has lost three receivers due to injury in fall camp.

Brenden Schooler went down early in camp with a foot injury and will be out until mid-season. Schooler, at 6-2 and 197 pounds, was primed to have a big time senior season as one of the starters. He has 41 career catches and four touchdowns.

True freshman Mycah Pittman was turning heads left and right in the Spring game and in Fall camp. At 5-11 and 198 pounds, the Calabasas, Calif. native was one of the top receivers in the country coming out of high school. He finished his prep career with 32 touchdowns and over 3,000 yards. Unfortunately, his Duck career will have to wait a few weeks as he is down with a shoulder injury.

But Herbert still has plenty of receivers to throw to.

One of the receiver who might get more chances because of the untimely injuries is Johnny Johnson III. The 6-0, 199-pounder from Chandler, Ariz. caught 17 passes last season and scored four times. He played in all 13 games as a sophomore and started six. Those starts could easily go up.

Junior Jaylon Redd is expected to start in the slot position. At 5-8 and 180 pounds, Redd has the ability to make defenders miss in the open field. He had a breakout sophomore season with 38 catches, 433 yards and five touchdowns.

Cristobal and his staff went out in recruiting to fill the receiver depth chart and they didn’t go after just anybody who can catch a football. They recruited top receivers in the nation.

Besides Pittman, Oregon signed three other receivers, including Josh Delgado, who enrolled in January, JR Waters and Lance Wilhoite.

Delgado, at 5-11 and 180 pounds, was one of the top receivers in Florida after transferring to the IMG Academy for his senior season. He should see some playing time as a true freshman.

Waters also hurt his foot in the preseason and had surgery, so a redshirt is most likely in his immediate future. At 6-3 and 190 pounds, Waters has the promise of being of those big time players. He was wanted by nearly every school in the west.

Wilhoite was the top receiver to come out of Tennessee. At 6-3 and 175 pounds, he will most likely redshirt, but if these injuries mount up more, that plan might go out the window. Wilhoite missed most of last season with an injury, but as a junior, he collected 69 catches for 1,089 yards and 13 touchdowns.