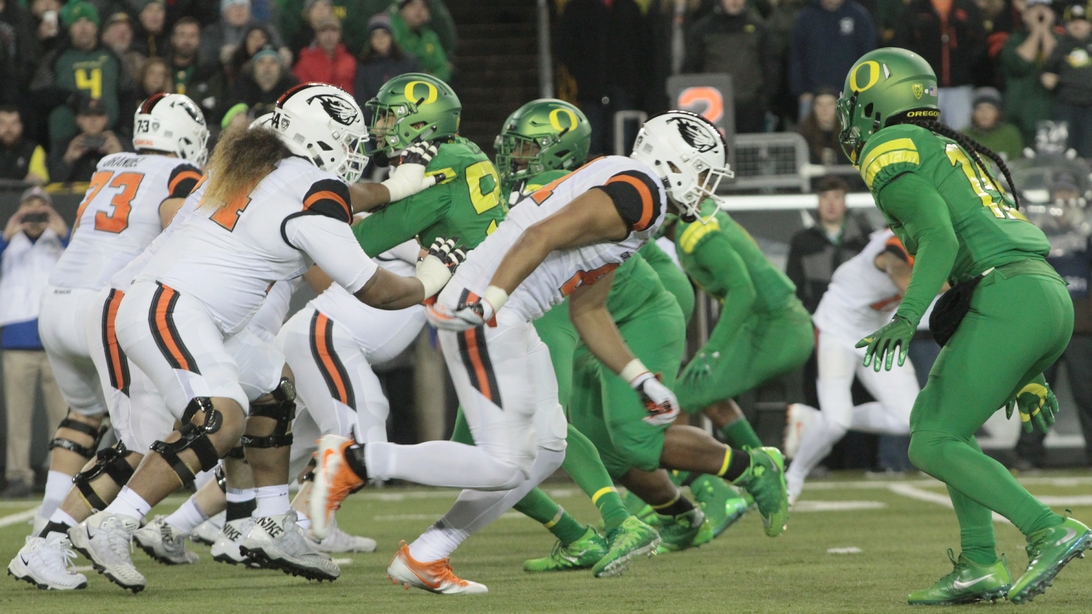 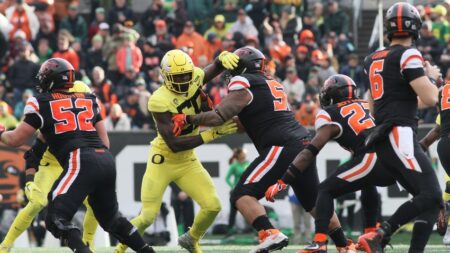 1894. The Wright Brothers were still building bicycles. There were 44 stars on the flag – Arizona, Nevada, New Mexico and Oklahoma were still territories and it was only five years earlier the state of Washington had joined the Union. Grover Cleveland was in the second of his two non-consecutive terms as US President – the only such presidency in this nations’ history. It would be 12 years before Henry Ford started selling the Model T. It was as good a time as any for the State of Oregon to make its contribution to the legacy of the era.

For the first time that year the Oregon Agricultural College gridiron heroes and their counterparts 40 miles south on Hwy 99 – before there was a Hwy 99 South – would meet on the football field.

Corvallis in the fall is as quaint a town as one  can find but not on that November 3rd, when the visiting Ducks were sent home smarting with a 16-0 loss in the first game of a series that will on Saturday be played for the 123rd time.

While the Beavers claimed first blood, the Ducks took a quick strangle hold on the series, winning 20, losing seven and playing to a tie six times in as the rivalry grew.

The shoe was on the other foot from the 30’s into the 60’s as Beavers put together a 14-3 run to forge what has become one of the most intense rivalries on the college football calendar each and every season.

Through good times and bad times – and each program has seen both – the Civil War is an institution in and of itself, centered upon a football game certainly but much more deeply woven into the fabric of the 33rd state and those who have an attachment to either university.

This year isn’t any different in that the game will offer a thousand story lines that will shape the anticipation leading up to Saturday’s kickoff and then once the final score is posted, offer the insight and perspective only history can allow us in the years to come.

Each team is living with a case of the “shoulda, coulda’s” after emotional losses last Saturday, Oregon to Arizona State and the Beavers to Washington State.

The loss in Tempe knocked the Ducks out of any possibility they may have held for a College Football Playoff invitation and the disappointment after winning nine straight games to play themselves back into the conversation was palpable.

Oregon State’s loss was just as bitter. Leading 53-42 with 1:14 remaining in the game the Beavers turn the ball over on downs and watch the Cougars score a game winning touchdown on the last play of the game, keeping OSU one win short of bowl eligibility.

No preseason projections had the Beavers anywhere near six wins and along with the additional motivation of the rivalry match-up, Oregon State will be playing with house money when they come to Autzen.

For the Ducks the motivation is put the train back on the tracks in preparation for what will be an imposing matchup with Utah in the Pac-12 Championship next Friday night and the Rose Bowl berth a win in Santa Clara would insure.

Defense has been the Achilles heel for the Beavers all season but head coach Jonathan Smith has the offensive side of the ball have generally been able to put points on the board against pretty much everybody but Washington and Utah.

The trifecta of quarterback Jake Luton, running backs Jamar Jefferson and Artemis Pearce along with wide receiver Isaiah Hodges are a handful for any defensive coordinator to scheme against. Particularly so for Oregon’s Andy Avalos after the Duck defense was riddled by ASU last week – a team Oregon State beat.

Oregon’s best course of action would appear to be avoid a high scoring, back and forth kind of affair that would give the Oregon State offense the opportunity to build rhythm with the play calling and keep the Oregon defense on its back heel.

That puts the pressure on offensive coordinator Marcus Arroyo to find a way to succeed at a game plan that didn’t work a week ago in Tempe. Control the clock, move the chains and finish drives in the end zone to keep Luton and his cohorts on the sidelines as much as possible.

In addition to the new details each Civil War adds to the legacy of the series it is also the last conference game any of the seniors will play and obviously the last home appearance for the seniors on the host team as well. As if there wasn’t already enough emotional electricity in the air when the Ducks and the Beavs tee it off Thanksgiving week each November.