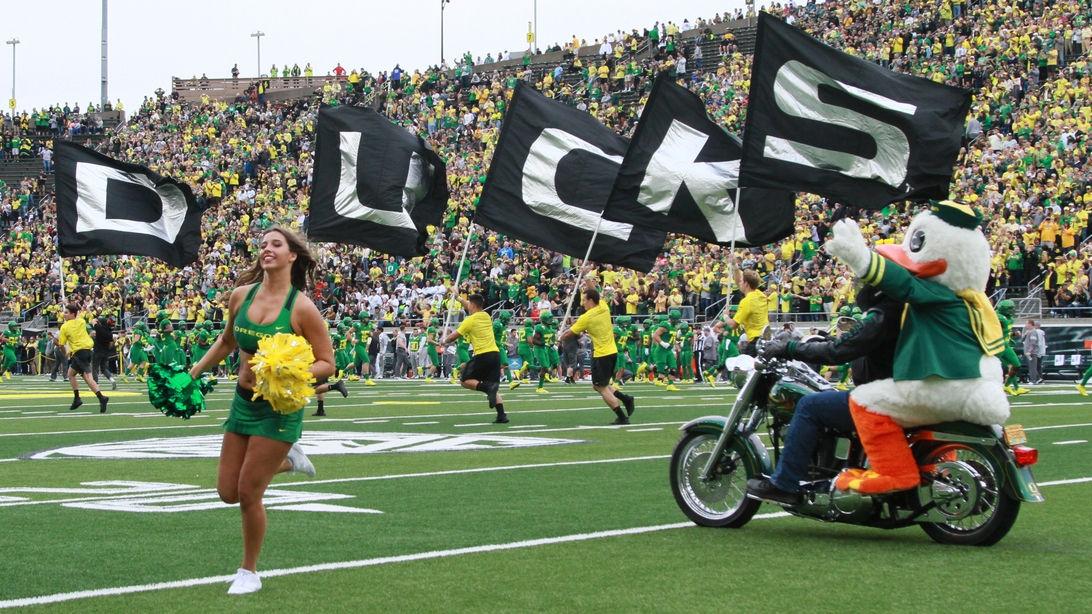 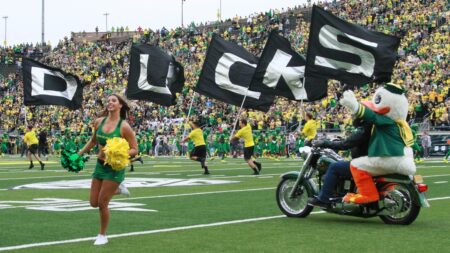 A lot of water has flowed under the Autzen Stadium footbridge since the Montana Grizzlies made their last appearance in Eugene.

The year was 2005 and after an impressive debut at Houston where he carried at least five Cougar defenders for the last ten of a 33-yard scamper, running back Jonathan Stewart gave the home crowd a lasting first impression, taking the opening kickoff 83-yards to the house as the Ducks overwhelmed the Grizz 47-14.

Other notables from that day – quarterback Kellen Clemens was 24 for 40 with a pair of touchdowns, placekicker Paul Martinez set a school record with six field goals and Jordan Kent stepped off the track and the basketball court to record his first collegiate catch – a 40-yarder from Clemons in the first quarter.

What history will record from this Saturday’s 7:45 match-up (Pac-12 Networks) is yet to be determined but it is likely more than one Oregon player will post a memorable stat line sure to be recalled the next time Montana comes to town as this looks to be even more of a mismatch than that game 14 seasons ago.

That is mostly due to the elevated talent level Oregon will field and isn’t necessarily a knock on Montana. The Grizzlies have a potent offense led by returning quarterback Dalton Sneed.

A true “two-headed monster” behind center, Sneed completed 241 of 384 pass attempts in 2018 for 2723 yards, 22 touchdowns with 17 interceptions. He was also the team’s leading rusher, calling his own number 131 times for 675 yards and half a dozen scores.

Head coach Bobby Hauck hopes that JUCO transfer Marcus Knight can shoulder some of that load in 2019 and in the Grizzlies first two games the running back has picked up 136 yards on 26 attempts for an average of better than five yards a touch while scoring three touchdowns. Adam Eastwood provides some depth in the running game as the second option behind Knight.

In addition, Sneed is protected by a front line that averages somewhere in the neighborhood of 6’5” and 300-plus pounds. With only one senior in the bunch, inexperience was an issue a year ago as the Grizzlies allowed 25 sacks and remains something of a concern in 2019.

Defensively the Grizzlies return seven of their eleven top tacklers led by Dante Olson at linebacker. The 6’3” Medford, Oregon product recorded a team leading 151 tackles in 2018, good for second in the FCS.

Son of the head coach, Robby Hauck gives Montana savvy and experience at safety and Jesse Sims (6’4”, 280 lbs) will have to be dealt with on the defensive line.

Montana finished 6-5 a year ago and have been picked to finish in fourth place in the Big Sky by a poll of the conference coaches and slotted for fifth place in the media survey.  The two wins to open the season offer some optimism the Grizzlies may exceed those expectations by year’s end but this Saturday at Autzen the comparative lack of depth at the skill positions and the exponential disparity in athleticism across the board will likely make it a less than enjoyable visit.