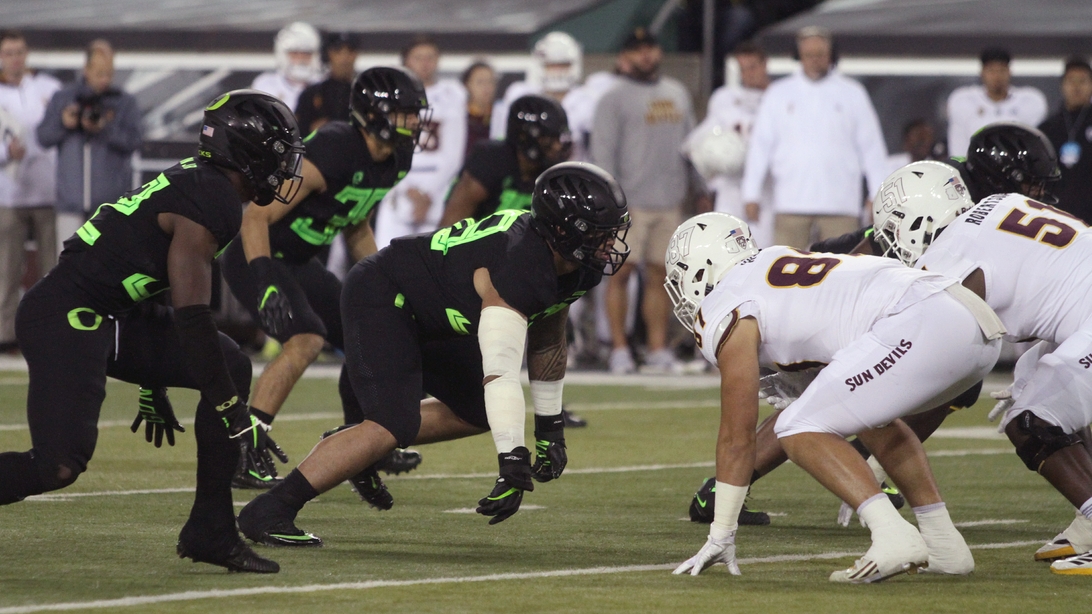 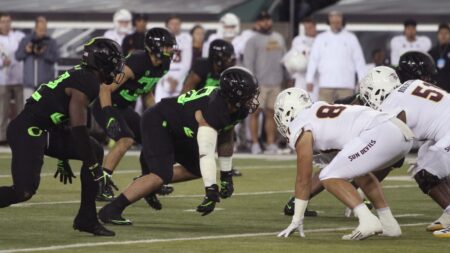 Should Oregon put it all together and contend for a title, whether it’s a conference title or national title, it could well depend more on the defense, not the prolific offense.

As is the case with the offense, everything starts up front and the Ducks have plenty of talent to stop the run and to rush the opposing quarterback.

Nose tackle Jordon Scott will be a big factor, both literally and figuratively, for this defensive unit. At 6-1 and 322 pounds, the Largo, Florida native was a second team all-Pac-12 selection a year ago as a sophomore.

Scott followed up a freshman season where he was named as a freshman All-American by starting all 13 games last season. He compiled 29 tackles, 14 solo and a sack as one of the top defenders in the Pac-12.

Scott has plenty of size playing beside him as well. Senior Gus Cumberlander at 6-7 and 256 pounds with Austin Faoliu at 6-3 and 293 pounds to help Scott take space and cause havoc in the backfield.

Cumberlander hasn’t seen a lot of action in the first three seasons as a Duck, but in his senior season, the Ellenwood, Georgia native has a chance t make an impact at the defensive end position. As a junior, Cumberlander was second on the team with four sacks as he was the only Pac-12 player last season to have two sacks and a fumble recovery in the same game.

As for Faoliu, the Santa Ana, Calif. native made 44 tackles and two sacks last season as he was graded out to be one of the top defensive ends in the Pac-12 and nothing should change this season. In his freshman season, Faoliu finished with 22 tackles, including 13 solo.

Also in the mix to full the depth chart is a lot of size with seniors Gary Baker at 6-3 and 310 pounds and Drayton Carlberg at 6-5 and 282 pounds.

But when it comes to the defensive line, everyone is talking about prize recruit Kayvon Thibodeaux. The 6-5, 245-pounder from South Central Los Angeles was the No. 1 recruit in the land, according to most services.

He recorded 54 sacks in his four seasons as a prep and had at least one sack in 16 of 24 games as a junior and senior. As a senior, he managed to sack the quarterback 18 times to go along with 54 tackles and five forced fumbles. He had three games where Thibodeaux had three sacks.

Although Thibodeaux isn’t at the top of the organizational chart as of yet, he will see plenty of playing time and become a Pac-12 quarterback’s worst nightmare before long.