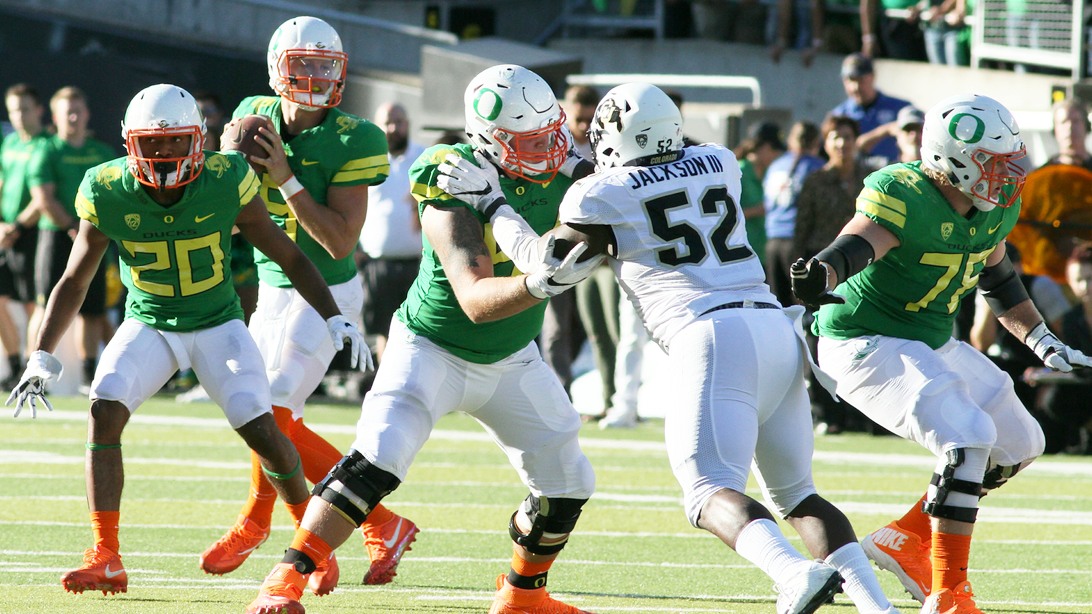 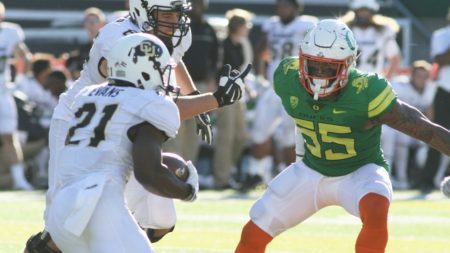 One can convincingly argue that margin is predicated on the need to attract betting dollars to the Colorado side of the equation because between the white lines the teams are much more evenly matched.

Senior quarterback Steven Montez took the field against Oregon as freshman in 2016 when starter Sefo Liufau was injured and knocked off the Ducks 41-38, completing 23 of 32 attempts for 333 yards, good for three touchdowns.

Colorado went on to finish first in the southern division that season with an 8-1 conference mark that season but since that day it has been hard times in Boulder.

A pair of two-win Pac-12 performances in 2017 and 2018 brought an end to the Mike MacIntyre era and when Colorado comes calling this year they will be led by first year head coach Mel Tucker, a face very familiar to Oregon head coach Mario Cristobal.

Tucker has brought much of the same mentality to the Buffs as Cristobal has to Oregon… instilling toughness and physicality are the first orders of business for a team that has – with the exception of 2016 – mostly been used as a doormat since joining the Pac-12 in 2011.

With Montez behind center, Tucker has one of the Pac-12’s most experienced signal callers and through five games so far in 2019, Montez has led the Buffs to a 3-2 record, completing 118 of 176 attempts for 1,463 yards and ten touchdowns with a pair of interceptions. Solid numbers all around as reflected by a 153.4 quarterback rating heading into Friday’s showdown with the Ducks.

A quartet of receivers is at the other end of the vast majority of those tosses. Tony Brown leads the pack with 29 receptions good for 442 yards and four touchdowns and boasts an average of 15 yards per catch. K.D. Nixon is right behind with 302 yards on 18 catches while averaging nearly 17 yards a touch.

Along with Laviska Shenault Jr. (17 catches, 226 yards) and Dimtri Stanley (15 catches, 185 yards), that foursome will be key to any success the Buffaloes hope to enjoy against the Ducks and will clearly be a focus for Oregon defensive coordinator Andy Avalos when scheming up his game plan.

Alex Fontenot and Jaren Mangham share the duties at running back with Fontenot serving as the bell cow, accumulating 392 yards on 88 carries and four touchdowns. The sophomore running back is a dangerous receiver out of the backfield as well with 13 receptions and one touchdown. Mangham is the short yardage workhorse with 197 yards on 49 carries and three touchdowns.

All of which is to say that while the Oregon defense has garnered the headlines for the Ducks so far in 2019, they have yet to face an offense with the experience and versatility the Buffaloes will bring to Autzen.

Which in turn may give rise to an opportunity for Justin Herbert and the Oregon offense to step into the limelight.

The Buffalo defense has yet to hold an opponent to less than 30 points and is yielding in excess of 470 yards of total offense per game.

The strength of the Colorado defense is up front where linebacker Nate Landman leads the team with 40 solo tackles and defensive ends Mustafa Johnson and Terrance Lang will be a point of focus with a combined five quarterback sacks.

The secondary is young and yet to gel, as witnessed last week when Arizona quarterback Khalil Tate torched the Colorado backfield for 404 yards and three scores through the air.

To Oregon offensive coordinator Marcus Arroyo the Buffalo secondary presents an opportunity to open up the playbook and to use the canon of an arm attached to Justin Herbert to stretch the field vertically.

That three touchdown margin may seem a bit out of sorts for an offense that has scored 21 pints or less in three of their five games but for the Ducks the bottom line has been score enough to win however lacking in style points the final result may appear.

Turnovers and needless, uncharacteristic penalties stifled the Oregon offense against a very solid Cal defense a week ago and should those issues crop up again against Colorado, the money would be on the under.

But with a now fully staffed receiving corps and if the Ducks avoid tripping over their own feet Colorado is unlikely to keep Herbert and the Oregon offense off the field for significant stretches and the game could get out of hand quickly.

For the Ducks the defensive formula will be much the same… force a turnover, get three and outs and keep Montez on the sidelines.

With the inside track to the northern division title theirs to take, an Oregon win over Colorado would put the Ducks in position to effectively hammer in the last nails to the coffin of any remaining contenders for the title next week in Seattle against the Huskies.