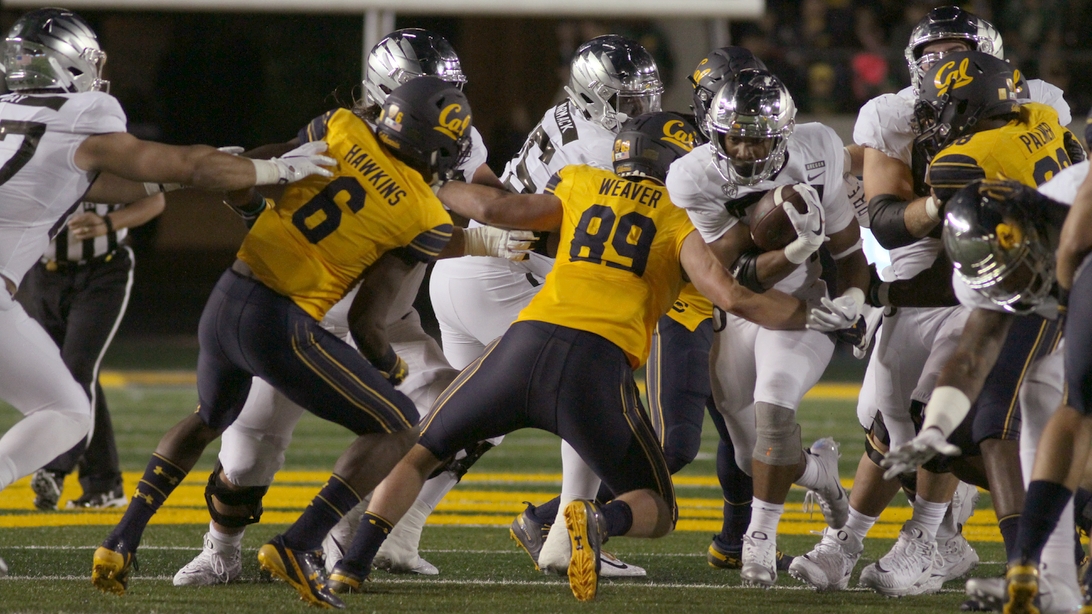 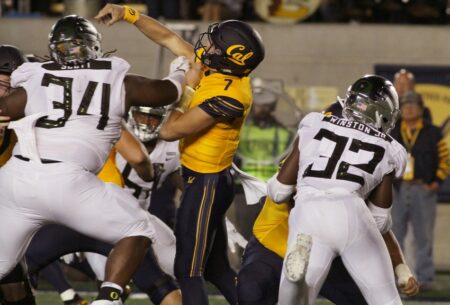 On the surface it is easy to assume the Oregon Ducks will light up the California Bears like a pinball machine when the two teams square off Saturday afternoon (5:00 pm, FOX) at Autzen Stadium. The Ducks hold the decided upper hand in the rivalry; over the past decade Oregon has lost only once – a double overtime setback in 2016 – Justin Herbert’s freshman season.

In the nine remaining games Oregon has literally pounded the Bears into submission, winning by an average score of 45-20 with the Ducks breaking the 50 point barrier three times.

The last time the Bears were able to hold Oregon to less than 42 points was in 2008 when Jeremiah Masoli and the Ducks fell 15-13 and nearly drowned in a torrential rain that fell most of the game.

Fast forward to 2019 and the script appears likely to follow the prevailing pattern despite some early indications the match-up could be a lower scoring, more defensive battle if without the monsoon.

For the first month of the season California’s offense was inconsistent but was able to put just enough points on the scoreboard to sweep the non-conference schedule then stun Washington in Seattle while relying on one of the Pac-12’s best defensive units to keep the score within reach.

That formula fell apart in the Bears’ loss last Saturday to Arizona State when starting quarterback Chase Garbers landed awkwardly on his throwing shoulder and was ruled out indefinitely.

That leaves backup Devon Modster behind center for the Bears and unless the UCLA transfer steps up his game markedly from the 5/23, 23 yards, 1 INT showing after taking over for Garbers against ASU, it will be a long, long night for what was already a somewhat anemic offensive attack.

Given that reality, the Bears are likely to try and make it a possession game on offensive, avoid turnovers and keep the Oregon offense off the field then hope when the Ducks do have the ball, their defense can keep a lid on Herbert.

The Bear defense is capable… linebacker Evan Weaver is as physical as they come and leads the Pac-12 with 78 tackles while the California secondary is perhaps the most experienced defensive backfield in the conference.

But their task will be daunting and particularly so thanks to the Ducks having an extra week of preparation and a welcome return to the lineup of a couple of wide receivers who have missed the opening four games. Brenden Schooler and Mycah Pittman are likely to see their first playing time of the season against the Bears and perhaps even Penn State transfer Juwan Johnson could add to the depth of a position group that was stretched tenuously thin during fall camp.

More options at receiver may well be part of the solution to Oregon’s challenges in running the football, Weaver notwithstanding. Should Herbert and offensive coordinator Marcus Arroyo find they can get the matchups they want and are able to make completions, the extra effort the Ducks paid to improving the play of the offensive line and the running backs during the bye week could pay big dividends, quickly.

In a classic 1-2 punch offensively, last year Oregon rolled up 260 yards rushing against the Bears with both C.J. Verdell and Travis Dye topping the 100-yard mark and when that dynamic duo wasn’t running roughshod through the defense, Herbert threw the ball over the top for two scores, completing 16 of 22 attempts for 225 yards.

Connect all the dots and it is difficult to see how the Bears can avoid getting bounced on Saturday though that statement could just as easily been made before California knocked off the Huskies. If the Bears can replicate that result they will hold the inside track to their first ever northern division title, but without Garbers and with Oregon in position to fully open up the offensive playbook for the first time this season those ambitions likely come to an abrupt end.