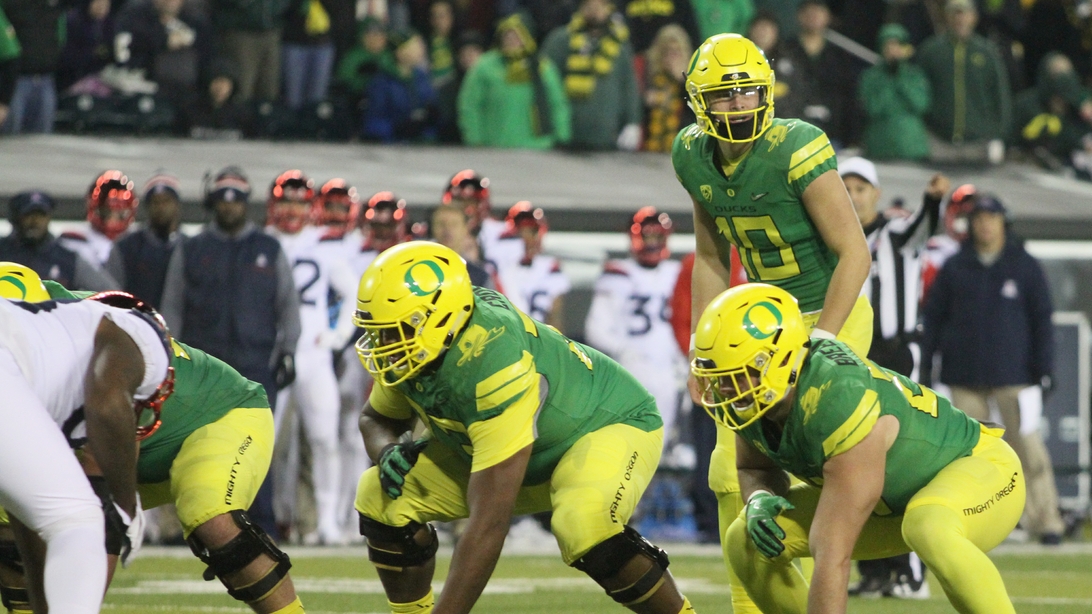 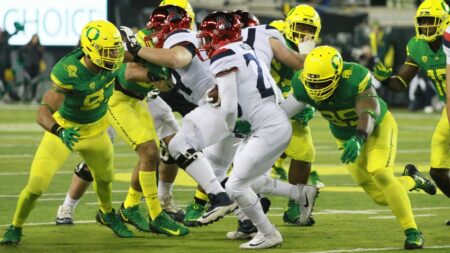 The last time Oregon lined up against the Arizona Wildcats they were fresh off a 34-20 loss at an electric Martin Stadium in full Gardner Minshew mania mode. ESPN’s Game Day made the pilgrimage to Pullman to add to the festivities.

After sleepwalking through the first half, Oregon rallied from a 27-0 deficit at the break to close within a touchdown midway through the fourth quarter but couldn’t overcome the early deficit.

In a perfect world, the Ducks put that lesson behind them and come out the following week at Arizona with their hair on fire and ready to go toe-to-toe from the kick-off right?

“Not so fast my friend” someone once famous used to say… once again the home team took the game right to the Ducks from the jump and once again Oregon was flat-footed as the Wildcats boatraced the Ducks 44-15.

To Oregon’s credit after being taken to the woodshed on back-to-back weekends they regrouped to win four of their last five games and assembled the foundation for what has been an enormously successful 2019 campaign.

As for the Cougs and the Wildcats this year it has been just the opposite – both are at 4-5 on the year and looking up at the rest of the Pac-12.

So with Arizona set to visit Autzen for a 7:30 kickoff on ESPN it would be easy to assume Oregon is poised to repay the Wildcats the favor of a beatdown and such could well be the result.

Arizona has been wildly inconsistent offensively all season and nothing less than awful on defense.

Ranking last or next to last in nearly every defensive category, the Wildcats allow a league worst 481.2 yards and 37.3 points per game.

With only ten sacks to their credit, the Wildcats have been ineffective at generating a pass rush with their front seven, leaving the secondary to be shredded to the tune of 313.4 yards passing allowed per game.

Following a 41-31 loss to Stanford, head coach Kevin Sumlin fired the defensive coordinator and the linebackers coach only to see the defense cough up 56 points in a loss to the Beavers one week later.

Yes, Arizona – like the Ducks – were on a bye last week but these aren’t issues that will be corrected in a week. Particularly against an offense that by every appearance is hitting its stride as the season enters the home stretch.

While once the Wildcats could count on out scoring teams with the arms and the legs of quarterback Khalil Tate the one-time Pac-12 Offensive Player of the Year has not found Sumlin’s offensive playbook as good a fit as Rich Rod’s spread offense had been. A hamstring injury has hobbled the senior as well, giving true freshman Grant Gunnell a chance to get his feet wet running the offense.

As with most true freshman Gunnell struggles with his consistency but has shown he has dangerously quick feet if you lose contain and can sling the ball into tight windows if he can set himself. But with an offensive line that has been porous, those opportunities have only offered an occasional  glimpse of the possible and have been too few and too far between.

At this point in the season , Sumlin has the two splitting time behind center and with the bye week it will be something of a mystery as to how often and in what situations will the Ducks see Tate or Gunnell taking the snaps.

The one shining light for the Wildcat offense is the guy that almost single-handedly ripped apart the Oregon defense a year ago, running back J.J. Taylor. After gaining better than 1400 yards a year ago, Taylor’s pace has slowed some with 566 rushing yards to date but he has also grown into a more dangerous option as a receiver with career bests already in receptions (20), yards (205) and average per catch (10.3).

More than revenge of the loss of a year ago the likely motivation for the Ducks is a win over the Wildcats clinches Oregon’s first northern division title since 2014. The football takes funny bounces and by all appearances they all would have to bounce Arizona’s way for the Wildcats to pull off an upset but this is the Pac-12 and the conference does savage its own with regularity.

Unless Tate and/or Gunnell are better able to solve the X’s and O’s of Oregon defensive coordinator Andy Avalos than anyone else on the Ducks’ schedule so far, things could get out of hand quickly for the Wildcats.

The more probable script is the Oregon offense has bit more polish and lethality with receiver Juwan Johnson coming into his own plus a week’s worth of recuperation for running back C.J. Verdell and the Arizona defense takes another statistical – and literal – shellacking.