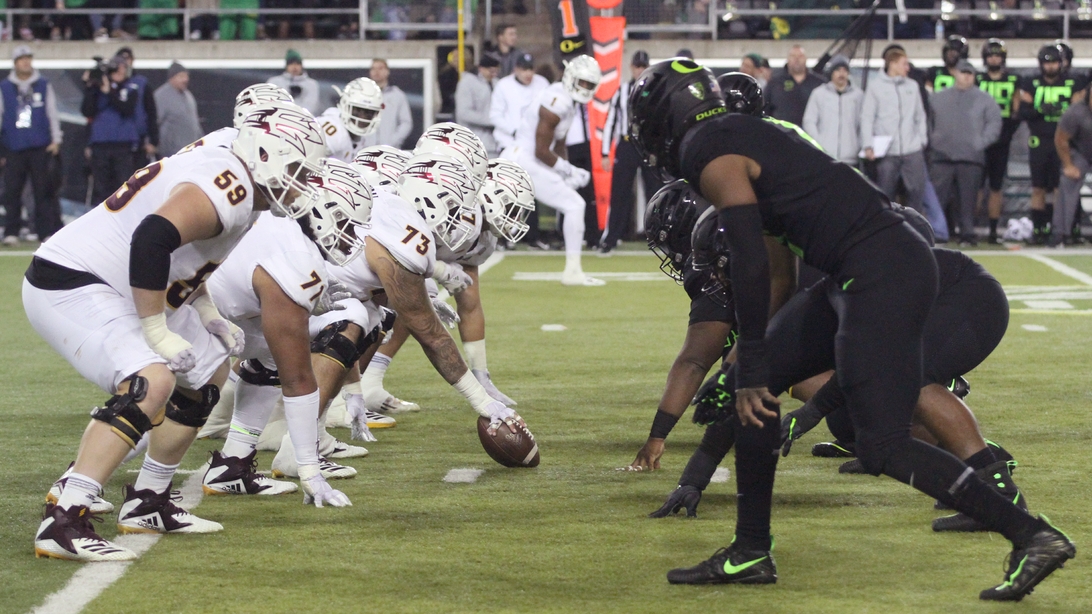 Since adding Colorado and Utah to the Pac-10 in 2011 no team has gone through the Pac-12 gantlet unscathed and two of its champions during that span sported a pair of losses.

Fast forward to 2019 and the only team with the opportunity to snap that trend is Oregon should they win the remaining two games on their schedule.

Head coach Mario Cristobal has both recognized his team deserves to be undefeated but that its best football is still ahead. His sense of timing is perfect – to close out the 2019 schedule unblemished the Ducks will be facing three of their toughest challenges of the season back-to-back-to-back in a dangerous Arizona State team in Tempe., a resurgent Oregon State team in the Civil War and Utah a presumptive opponent in the conference championship game.

The Sun Devils have dropped four straight games and with the exception of last week in Corvallis the losses haven’t been particularly close.

With true freshman Jayden Daniels at quarterback growing pains were expected in Tempe and as the season reaches the home stretch, it is clear patience will be rewarded. Daniels is dynamite with a short fuse, completing 61.4% of his pass attempts and has been intercepted only twice. As the team’s second leading rusher, Daniels is always a threat to find yards where there should be none escaping the pass rush.

A porous offensive line has the youngster frequently running for his life and he has been sacked 24 times, coughing up 133 yards of field position in the process.

A trio of receivers – Brandon AIyuk, Frank Darby, Kyle Williams – do most of the damage when Daniels is able to avoid the pass rush. Aiyuk’s 964 yards, seven touchdowns and 53 receptions pace the group but Darby is averaging nearly 20 yards per touch.

Running back Eno Benjamin adds to the passing game arsenal with 34 catches, 279 yards and two touchdowns as a receiver. When taking the handoff, Benjamin averages 4.3 yards per touch with a team leading 801 yards and eight touchdowns on the ground.

Added all together the Sun Devils will challenge Oregon defensive coordinator Andy Avalos both in stopping the run and in pass defense while at the same time having to keep Daniels’ ability to break a play open in check.

It has been on the other side of the ball that has been the Achilles heel of late for the Sun Devils.

Despite being ranked fifth overall in defense in its last four losses, Arizona State has yielded an average of 32 points per game allowed nearly 1700 yards of offense.

At 5-5 overall and 2-5 in conference and out of contention in the southern division, bowl eligibility and laying the ground work toward a better future is all that Arizona State has to play for at this point of the season.

A win over the Ducks would go a long way toward addressing each of those agenda items and the Sun Devils are capable of the upset.

Cristobal is is undoubtedly right – if the Ducks are to become the first team to navigate a Pac-12 schedule unblemished, they will need to play their best football starting now.