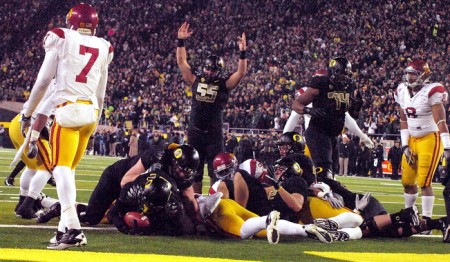 Once again the offensive line for Oregon will be deep. That said – this might be a good year to not have to open with an LSU – there will be a lot of inexperience up front with the Ducks forced to replace the talent and maybe more importantly the leadership of Mark Asper and Darrion Weems.

But with a full fall camp and three home non-conference games to prepare for the Pac-12 season, the Ducks should be just fine by the time Pac-12 play starts, according to coach Steve Greatwood.

“We’ve got quite a few faces to choose from,” Greatwood said. “We’ve got some young kids who didn’t get playing time, but athletically they have more ability than any group that we’ve had for a while so I’m excited about where we are at. I love the competition that is going on right now.”

Every play starts with the snap and that means sophomore center Hroniss Grasu. He started all 14 games as a freshman and was named to a Phil Steele’s second-team all-freshman team. As fall camp approached Grasu was named to the watch list for the Rimington Trophy for the nation’s top center.

“We wanted to remind ourselves that there are bigger goals than just the Rose Bowl,” Grasu said. “We all had a meeting and told ourselves to keep working hard.”

One thing that will change is who Grasu will be snapping the football to; it won’t be Darron Thomas.  But Grasu isn’t concerned.

“Everyday at practice there’s competition at all times and the guys behind me are getting better,” said Grasu. “It really doesn’t matter who the quarterback is as far as the offensive line is concerned. Our job is to protect and make room for them. They’re all great players and athletes and they actually make our jobs easier.”

“I’m really confident about the guys we have,” York said. “It’s going to fun to see these young guys step up and play. We probably have more guys capable of being on the field than I have ever seen here.”

“We have to make sure everyone flows together as a group because we got new guys playing and new guys trying to start,” Fisher said.